This bottle was drinking quite well at 3 years from vintage.  Light gold/green in color.  The nose is expressive; sugary with some honey dew melon.  On the palate, this is dry.  On the palate, this is dry.  Some lemon pith.  Just a bit of depth.  Round.  Very clean.  Nice.  Would work with lighter foods and makes a very nice starter wine.  $20 retail is a good value.  Drink now. This was a very popular wine among friends.  Inky purple in color. The nose has black raspberries, roasted herbs, slight roasted meats and black pepper.  On the palate, juicy black raspberry fruit.  Slightly jammy.  A bit sweet.  "Old school" Australian Shiraz but within reason.  Not over blown for the style.  This will need big and/or spicy food.  It also works very nice as a cocktail wine.  Available at Nakedwines.com. First these were super popular and then you couldn't give them away.  The fact is, there are some excellent Australian Shiraz and many of the cellar just fine.  If you liked them young, you will probably like them with some age.  At age 16, this one is humming along and drinking great.  Purple in color, ruby at the rim.  The nose has black raspberries. This was a treat and a new one for me.  Iced Tea in color.  The nose has a lot of alcohol.  When you get past that there is a lovely caramel.  It is sweet but not cloying.  Much smoother and better on the palate.  Caramel and some chocolate.  Warm not hot on the finish. This is a classic big Australian export wine.  Its a blend of Shiraz and Cabernet and really goes well on a cold winter's day.  Inky purple in color.  The nose has some black cherry cough syrup, black raspberries and black pepper.  On the palate, this is ripe with black cherry and black raspberry fruit.  It is warming but not hot.  Nice texture.  Tons of fruit.  Its about pleasure not contemplation.  Long finish.  Certainly not for every one, but I like it at the right time. This was opened at a blind tasting and I think the entire table guessed correctly what it was.  Certainly a distinctive wine.  Purple in color.  The nose has black olives, green olives and black cherries.  Nice enough.  On the palate, this is sweet and almost cloying.  Black raspberry fruit.  I had not had it in about 4 years and it hasn't held up that well (or it is in a bad spot right now).  It is certainly drinkable but given the price...  Some liked it more than I. My friend Chris opened this for us.  He has had it since release.  It had been opened earlier in the day and given air.  This is still quite young but with air, it was superb.  Purple in color.  The nose has cassis, cedar, eucalyptus/mint and slight fresh tobacco.  Full bodied.  Great texture.  On the palate, there is a lot of fruit.  The cassis carries thru along with the eucalyptus.  Also some coffee and hints of dill.  Complex.  Great with food.  Not at all the kind of wine one thinks about as coming from Australia yet it seems to show its sense of place.  Quite a treat.  Impressive. 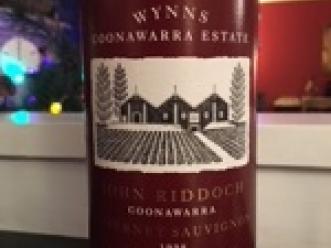 Purple in color.  The nose is dusty with some black raspberries and coffee.  On the palate, slight tannins with ripe black cherries.  Slight heat on the finish, but overall this is good and a nice value.  These wines tend to last up to a decade or more if well stored. Respected Australian wine critic James Halliday has a career that spans over 40 years. Best known for his informative writing about wine, he is one of the founders of Brokenwood Winery in the Lower Hunter Valley region of New South Wales, and founder of Coldstream Hills in the Yarra Valley. Halliday is an authority on every aspect of the wine industry, from planting and pruning, to the creation and marketing of the finished product. He has served extensively as a wine judge and has contributed to more than 56 books on wine, and he is the author of James Halliday’s Wine Atlas of Australia, and The Australian Wine Encyclopedia. What prompted you to pursue winemaking as a career? You were in the legal profession prior to wine, do you think this would have been the path would you have chosen? Between 1962 and 1988 I had two lives, one in wine and one in law. Thus the question becomes academic.
END_OF_DOCUMENT_TOKEN_TO_BE_REPLACED

Wines to Go Buy This Week: An "Italian-fusion" California Red by Bargetto and Tahbilk Marsanne, a deliciously rare single varietal white. This past weekend we filmed the latest round of IntoWineTV videos (the first video will be live in about a week, we're moving away from wine reviews to wine discussions. Sort of a wine version of The View if you will). As is typical when we film IntoWineTV, the cast and crew had the luxury of indulging in many fantastic wines. Heck these shoots have almost become an excuse for everyone involved to share their latest wine faves. Over the course of the weekend I discovered two wines that made me do a double take and which are the basis for this week's "Wines to Go Buy This Week": La Vita, Bargetto Family Estate, Santa Cruz Mountains, 2006 - This wine arrived in a recent California Wine Club Signature Series shipment (and kudos to CWC as yet again they delivered a hit. I love the Signature Series.). La Vita is an unusual California red blend in that it is made from the traditionally Italian varietals of Dolcetto, Refosco, and Nebbiolo. Traditionalists may scoff at the notion of a California producer making its version of an Italian red -I'm just waiting for someone to complain that this wine has "no sense of place" - but the end result is a delicious wine that reflects qualities of both California and Italy. If this were a restaurant this wine would be labeled "Italian fusion". No it's not authentic or traditional but it is delicious, unique, and well worth a try (though at $60 a bottle, it's hardly a value buy). Buy Bargetto La Vita
END_OF_DOCUMENT_TOKEN_TO_BE_REPLACED