I know my mother shied away from cooking pork chops in the 1970s when the scare was on regarding worms from undercooked meat. Although she was a wonderful cook, what resulted on our plates looked like a piece of pink leather. Trichinosis is no longer a problem in the U.S., as pigs are no longer fed slop or raised in the mud. More recently, some folks think about the swine flu when they consider eating pork chops, but the World Health Organization stated that the swine flu is not passed through meat.
END_OF_DOCUMENT_TOKEN_TO_BE_REPLACED

It’s that time of year again. Girl Scout cookie time. Of course, for some people, that is a chance to avoid making eye contact with the Moms and Dads who are co-workers of yours. For others, it’s a chance to meet the neighbors as their girls’ tour door to door peddling the sugary wares. And for even others, it’s a chance to go off their diets in the interest of supporting the greater good.
END_OF_DOCUMENT_TOKEN_TO_BE_REPLACED 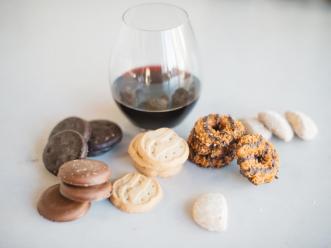 The Thanksgiving table screams wine and whereas there is no one particular wine that can accommodate the diverse foods at your table, Pinot Noir is certainly one of the more user-friendly wines. And given that Thanksgiving is time with family and friends, this Benovia Pinot Noir, only the second release from the Martaella Vineyard, is a great way to say thanks to those special people in your life.
END_OF_DOCUMENT_TOKEN_TO_BE_REPLACED

Ah, rosé. For many people it seems at best to be a wanna-be red wine with training wheels; at worst it’s a sugar and strawberry one trick pony pink wine. But great rosé can be one of those go-to wines that accompany a delirious number of foods. But - just try finding a good one, right? Well, the Triennes Rosé enters this conversation and, voilà , you find yourself nearly speechless. Composed of 60% Cinsault along with Grenache, Syrah and Merlot, all harvested at night to retain better flavors, the Triennes, located in Aix-en-Provence, near Marseille is what rosé is really all about – poise, confidence, flavor and diversity.
END_OF_DOCUMENT_TOKEN_TO_BE_REPLACED

Summer is here (or close enough anyway) and for many people, that means taking out the grill, inviting friends over and having a barbecue. For many of us wine lovers, choosing the right wine for a barbeque can become challenging. There are a lot of reasons for this. It’s usually hot or at least warm out and some wines just don’t work in the heat. Further, parties often involve groups of people and that means finding easily obtainable wines that don’t cost an arm and a leg to buy multiple bottles. Finally, the wine needs to match the food. Barbecue is big food with a lot of flavors. A wine needs to stand up to that otherwise why not just drink water. To start with, here is a break down on the types of wines to look for and then a few, but far from complete list of suggestions.
END_OF_DOCUMENT_TOKEN_TO_BE_REPLACED

Let’s face it, Mom probably drinks because of you (I know mine does). So IntoWine.com wanted to celebrate Mom with a dozen rosés , wines that are similar yet wildly diverse. Provence is the undisputed birthplace of rosé and the ancient Greeks brought vines to southern France around 600 BC, something the Romans improved upon when they arrived in the area in 125 BC. So rosé has a long history but as these wines show, r osé is truly global.
END_OF_DOCUMENT_TOKEN_TO_BE_REPLACED

For the 2015 Best of Sonoma Lists we surveyed hundreds of local vintners asking for their inside perspective of the best wines, tasting rooms, and restaurants in Sonoma. After surveying over 100 esteemed...
END_OF_DOCUMENT_TOKEN_TO_BE_REPLACED

For the 2015 Best of Sonoma Lists we surveyed hundreds of local vintners asking for their inside perspective of the best wines, tasting rooms, and restaurants in Sonoma. No trip to Sonoma wine country is...
END_OF_DOCUMENT_TOKEN_TO_BE_REPLACED

Best Wine to Pair With Lasagna

I’m usually a good speller, but was concerned when I saw a couple of my contributors recording a favorite comfort food as “lasagn a ”. I’ve been spelling the dish as “lasagn e ” for years. Then I was relieved to find that lasagn e indicates more than one piece of the pasta ribbon. I promise to get a life. However the dish is spelled, this beloved casserole really does hail from Italy, unlike some of the other so-called “foreign” favorites that have become completely Americanized. The early Italian version was typically layered with cheese, sauce and other ingredients. But the term originated in ancient Greece as “lasagnum”, referring to a dish or bowl. When eventually the region was acquired by the Romans, they used the same kind of dish, then developed the layered pasta meal to be baked and served in that dish. The early Italians ultimately changed the name of the container from “lasagnum” to “lasagna”, and later, the word began to represent the entrée baked in that dish.
END_OF_DOCUMENT_TOKEN_TO_BE_REPLACED

With summer upon us, grilled steak has natural appeal, especially irresistible when its alluring aromas waft over the neighbor’s fence. No one was happier than I to receive an assignment to pair wine with New York steak, my favorite cut, for it’s substantial texture, juicy potential and powerful flavor. Although I wouldn’t kick a filet mignon to the curb, its character is more subtle than the New York’s. Found on the short loin of the cow, the New York cut actually comes from the same cut as the t-bone and porterhouse. Having fewer muscles than other parts of the animal, this section of the cow is therefore worked less and the meat is more tender.
END_OF_DOCUMENT_TOKEN_TO_BE_REPLACED