Tintilia is a grape that is native to the province of Molise in Italy.  Think of the back of the knee in the boot.  With a few exceptions, Molise is not known for their wines, but this grape could be changing things.  This deep ruby in color, a bit lighter at the rim.  The nose has plums, cherries and baking spices and smoke.  Full bodied.  On the palate, the plums are at the forefront but there are cherries in the background.  Underneath is a charred, earthy quality.  There is some acidity but not what one might expect from Italy.  This is broad and delicious wine that took a few hours in 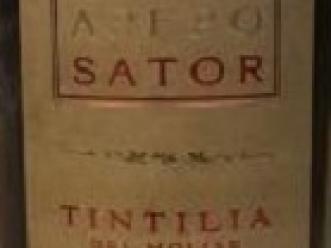 A friend of mine is from Molise.  A few years ago he mentioned the Tintilia grape to me.  Since then I have really been impressed.  This is one of the pricier ones I have tried so far.  It retails for around $35 which is a lot for a wine from Molise but not for this quality.  If I had to compare it, it seems like a mythical cross between Merlot and Aglianico.  Purple in color with some ruby swirls.  The nose has lots of cherries and dark cherries with some smoke/char.  Also kust a bit of dry earth.  On the palate, this has good acidity.  Lots of cherry and black cherry fruit with some under This is a really interesting wine that sells for $15.  It is 80% Montepulciano and 20% Aglianico.  The 2012 is what seems to be in the stores in the US right now and it is drinking great.  Purple in color with ruby swirls.  The nose has black cherries, smoke and plums.  On the palate, there is a nice underlying minerality with nice black cherry fruit.  Good acidity.  This worked well with pasta but drinks fine on its own, the acidity is not as much as many Italian wines.  Good finish.  Probably has another 3 to 5 years left.  Maybe more. This is a Riserva (the 2013 regular version is reviewed separately).  Frankly, this was not as good as the regular and cost $10 more.  Now, that may be a vintage thing and I don't have a lot of experience with this grape (Tintilia) or region (Molise).  Purple in color, ruby at the rim.  The nose has boysenberries and smoke.  On the palate, this has some boysenberries but not a lot.  A slight bitter note on the finish.  Some acidity.  Its a fine wine that is drinking well right now but not the value the regular bottling is.  Perhaps it is just in an awkward phase and needs time. Every year I get invited to a St. Joseph's day celebration by a friend who is originally from Molise.  It's a BYO event at a local hall with hundreds of people, tons of homemade food and a lot of fun.  I try to bring appropriate wines.  There are not a lot of wines made in Molisse and available here in the US.  This one retails for about $20 and is really good and a bit different.  Tintilia is the name of the grape.  I liked this vintage slightly more than a 2011 I had a couple  of years ago.  Purple in color. Perhaps the most obscure wine making region in all of Italy is the region of Molise. Molise is surrounded by Abruzzo, Lazio, Campania, and Apulia. Until 1963, the region of Molise was part of the same political region as Abruzzo ( Montepulciano d’Abruzzo was discussed in a previous article). In fact, the food and traditions here are closely associated with Abruzzo. Yet, its closeness to both Apulia and Campania lend it a bit of a southern influence. The wines of Molise achieved their own independence in the 1980’s with the creation of two DOCs: Biferno (named after the largest river in Molise) and Pentro di Isernia. These hillside areas receive wonderful sunshine and are sandwiched between the Apennines Mountains and the Adriatic Sea. Biferno wines can be red, white or rosé. The whites are predominantly made from the Trebbiano grape along with the Bombino in smaller proportions. The reds are a blend of mostly Montepulciano with some of the Aglianico grape. Wines from Pentro di Isernia can also be red, white or rosé. The whites are the same Trebbiano-Bombino grape blend, while the reds (and rosé’s) are usually a blend of Montepulciano and Sangiovese. More recently, in 1968 a DOC also called Molise was created. This DOC encompasses the region and allows for white, red, rosé and even sparkling wines.
END_OF_DOCUMENT_TOKEN_TO_BE_REPLACED