In the series on the 1855 Classification of the First Growths, I spoke exclusively about red wines. In that same year, however, the sweet dessert wines from the Bordeaux communes of Barsac and Sauternes were also classified. All of the dessert wines listed were rated as either premier cru (first growth) or second growth status. That is, all but Yquem which was rated Premier Cru Superieur (First Great Growth), a higher rating even than any red wine achieved in their 1855 Classification. Yquem is quite possibly the greatest wine made anywhere and has a history dating back four hundred years! While every wine region has its stars, there is probably no other winery that so dominates the quality of a region and has such as a lofty reputation as Chateau Yquem. What makes these wines so special is that they develop a rot called botrytis cinera also known as Noble Rot. When certain grapes are attacked they get moldy which, in a wonderful twist of fate, causes the grapes to lose much of their moisture, concentrating the flavors. The resulting grapes look like moldy shriveled raisins that produce a sweet nectar.
END_OF_DOCUMENT_TOKEN_TO_BE_REPLACED

Alicante isn't Spain's largest or most famous wine region. In fact, Alicante is fairly small, and it tends to be overshadowed by its better-known neighbors, Jumilla and Valencia. Alicante has much to offer the wine lover, however, particularly Fondillón, made from monastrell grapes and unique to this DO. Alicante's other wines, particularly its reds, have steadily worked their way up into the ranks of Spain's top-scorers, and the region's award-winning moscatels are also worth trying.
END_OF_DOCUMENT_TOKEN_TO_BE_REPLACED

Is California the only American region producing great wine? In this episode of IntoWineTV, host Lisa Kolenda and wine experts Bartholomew Broadbent and Pamela Busch convene at San Francisco's CAV Wine Bar & Kitchen for the tasting and discussion of 25 different American wines NOT from...
END_OF_DOCUMENT_TOKEN_TO_BE_REPLACED 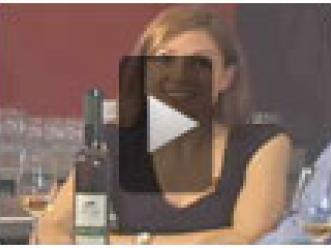 It's hard to find someone who dislikes a good crumble at the end of a meal (or for a sinister midnight snack). IntoWine.com asked our panel of wine experts to recommend a dessert wine to serve with fruit cobblers and crumbles: To more accurately answer this question, it really does depend on the type of cobbler or crumble. If the fruit base is red berry, then a red based dessert wine is called for. My favorite, crumbles and cobblers are, however, apple and peach. For those, a white grape based dessert wine makes sense. I would look to those from the Loire valley in France. For my money, the very best of these is from the Baumard winery and the Quart de Chaumes appellation. Right now the 2005 and 2006 Baumard Quarts de Chaumes are available in the market. 2005 was a fantastic vintage in the Loire. 2006, while classic, is not far behind. Both have great acidity that makes for a grand food match. Buy the 2005 Baumard Quarts de Chaumes As a bonus, these wines are available in half bottle formats (375 ml). A little dessert wine goes a long way. A half bottle can serve 6 (maybe 8) people for dessert. These wines are not inexpensive though. A half bottle can cost $35. Yet, this is one of the greatest bottles of wine in the world. The wine has wonderful apple and peach notes with hints of vanilla. It is slightly sweet but will not overpower a sweet dessert. The acidity brings everything together wonderfully. It is certain to be the hit of any dinner party. - Loren Sonkin , IntoWine.com Featured Contributor and the Founder/Winemaker at Sonkin Cellars.
END_OF_DOCUMENT_TOKEN_TO_BE_REPLACED

Muscat Beaumes de Venise is a light and sweet nectar of the Gods, with an aroma of rose petals and tropical fruit and a taste of candied oranges dripping with honey. It makes me glad for summer, because it is the perfect summer dessert wine.
END_OF_DOCUMENT_TOKEN_TO_BE_REPLACED

In this episode of IntoWineTV, host Lisa Kolenda and wine experts Bartholomew Broadbent and Pamela Busch convene at San Francisco's CAV Wine Bar and Kitchen for a blind tasting and discussion of 24 different wines made by women. Theme: Wines by Women. In this tasting IntoWine is featuring wines...
END_OF_DOCUMENT_TOKEN_TO_BE_REPLACED

Perhaps the most obscure wine making region in all of Italy is the region of Molise. Molise is surrounded by Abruzzo, Lazio, Campania, and Apulia. Until 1963, the region of Molise was part of the same political region as Abruzzo ( Montepulciano d’Abruzzo was discussed in a previous article). In fact, the food and traditions here are closely associated with Abruzzo. Yet, its closeness to both Apulia and Campania lend it a bit of a southern influence. The wines of Molise achieved their own independence in the 1980’s with the creation of two DOCs: Biferno (named after the largest river in Molise) and Pentro di Isernia. These hillside areas receive wonderful sunshine and are sandwiched between the Apennines Mountains and the Adriatic Sea. Biferno wines can be red, white or rosé. The whites are predominantly made from the Trebbiano grape along with the Bombino in smaller proportions. The reds are a blend of mostly Montepulciano with some of the Aglianico grape. Wines from Pentro di Isernia can also be red, white or rosé. The whites are the same Trebbiano-Bombino grape blend, while the reds (and rosé’s) are usually a blend of Montepulciano and Sangiovese. More recently, in 1968 a DOC also called Molise was created. This DOC encompasses the region and allows for white, red, rosé and even sparkling wines.
END_OF_DOCUMENT_TOKEN_TO_BE_REPLACED

A perfectly-balanced dessert wine menu does not just happen: much thoughtfulness and love goes into it before its vibrant siren song emerges at your table, beckoning you to sample a naughty sip. I had the good fortune to sit down with Andrew Bresnik, Wine Director of Bricco della Regina Anna and learn how a well-rounded dessert wine menu is born and how you can work your way through it. Bricco is a delightful neighborhood wine bar and bistro tucked
END_OF_DOCUMENT_TOKEN_TO_BE_REPLACED

Italy is known for many unique and delicious wines. This column has examined many of them. Up until now, however, we have ignored the topic of dessert wines. Many great dessert wines are made in all parts of Italy. Perhaps the most famous and renowned is Vin Santo. The name Vin Santo literally...
END_OF_DOCUMENT_TOKEN_TO_BE_REPLACED

December, what do we do with you? So full of merriment, yet so manic. Emotions bubble to the surface like corks, dredging up memories of past joys, pains, laughter and tears just in time for you to tie a nice bow around them all and start anew in January. And what better tumultuous time of year to give yourself a kick in the pants and try something new, like ice wine? Contrary to what you might think, ice wine is not a Cabernet Sauvignon-flavored popsicle (although, that’s a great idea….)
END_OF_DOCUMENT_TOKEN_TO_BE_REPLACED