One of the better values in Sauternes. Light golden in color. The nose has with pineapples, honey and some of peach. On the palate, this is viscous and rich.  Sweet but not cloying.  Good acidity that cuts through the sweetness.  Honey and Pineapple.  Nice finish.  This is great on its own and will work with a not too sweet dessert.  Drink over the next fifteen to twenty years.

Tasted from a 375ml bottle.  Light golden in color. The nose is nice with pineapples, honey and bit of peach.  Also some vanilla.  On the palate, this is viscous and rich.  Not cloying but a little goes a long way.  Good acidity that cuts through the sweetness.  The pineapple carries thru.  Nice finish.  Probably best on its own or with some cheeses at the end of a meal.  This should last for a couple of decades. From a tremendous vintage, but this Sauternes is great in just about any vintage and one of the more reasonably priced ones at that.  This was purchased on release and well stored.  Medium golden/orange in color.  The nose is great with honey, slight pineapple, slight saline and canned peaches.  Medium to full bodied.  On the palate, this is sweet not cloying.  It has dropped some of its sweetness in the 19 years since release.  Lots of depth and complexity.  Layers of peaches, minerals and honey.  Good acidity.  Nice finish.  This is great on its own and will work with a not too sweet frui 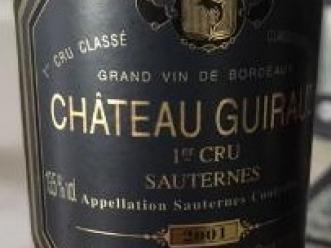 This is always a nice value in Sauternes.  Its good without being crazy priced and in 2005, they rocked.  Light golden in color.  The nose has honey, pineapple, slight peach a ginger.  Slightly viscous.  The palate is sweet without being flabby.  Honey and peaches.  Clean finish.  This is drinking well now and should continue for the  next fifteen years.  A nice match with a peach cobbler or less sweet fruit dessert. In the series on the 1855 Classification of the First Growths, I spoke exclusively about red wines. In that same year, however, the sweet dessert wines from the Bordeaux communes of Barsac and Sauternes were also classified. All of the dessert wines listed were rated as either premier cru (first growth) or second growth status. That is, all but Yquem which was rated Premier Cru Superieur (First Great Growth), a higher rating even than any red wine achieved in their 1855 Classification. Yquem is quite possibly the greatest wine made anywhere and has a history dating back four hundred years! While every wine region has its stars, there is probably no other winery that so dominates the quality of a region and has such as a lofty reputation as Chateau Yquem. What makes these wines so special is that they develop a rot called botrytis cinera also known as Noble Rot. When certain grapes are attacked they get moldy which, in a wonderful twist of fate, causes the grapes to lose much of their moisture, concentrating the flavors. The resulting grapes look like moldy shriveled raisins that produce a sweet nectar.
END_OF_DOCUMENT_TOKEN_TO_BE_REPLACED

Bordeaux Blanc: The "Other" Bordeaux is a Great White Wine for Now and Later

Sancerre? Yawn. Chardonnay? Ho-hum. Albarino? So 2007. Looking for a new summer white to pair with fish, grilled veggies, and salads? Something fresh, different? Something crisp enough to sip in the sun, solid enough to drink with dinner, and complex enough to enjoy on its own? Look no farther than Bordeaux.
END_OF_DOCUMENT_TOKEN_TO_BE_REPLACED