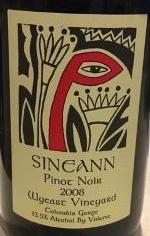 This is really drinking in a great place right now.  Deep ruby in color, mostly clear and bright.  The nose has sour cherries, slight spice, slight cherries and just a bit of earthiness.  On the palate, this  is juicy with a smooth texture.  Layers of sour cherries and cherries with a bit of earthiness.  Long finish.  This is probably at peak but should easily be at this level for another five to seven years before slowly going downhill.  A great match with roasted fowl but drinks well on its own too.

Peter Rosback will occasionally pull a barrel that is at a higher level and bottle it as a Reserve.  Such is the case with this bottle.  Deep ruby in color.  The nose is great with sour cherries, black cherries, baking spices and slight cedar.  On the palate, this has a great texture.  Lush, yet with plenty of vibrancy.  Juicy sour cherry fruit over some earthiness with a bit of char.  Good acidity.  Long finish.  This should continue to improve for five to seven years and be good for a decade or two after that.  It will work well with fowl or heartier sea food dishes. Great Pinot Noir—the Holy Grail of winemakers from France to Australia and the US, and one of the most notoriously difficult grapes to grow. The thin-skinned varietal is susceptible to rot, viruses and diseases and needs a perfectly cool climate and exacting vineyard management to thrive. After the grapes are harvested the winemaker has plenty of decisions to make, including whether or not to fine and filter the wine, how much tannin the final product should have and choosing a precise regimen of oak aging, since Pinot’s delicate flavors can easily be masked by the flavors of wood. It’s easy to make a disappointing, thin-tasting wine from this grape, but really fine Pinot is the stuff of the gods and the combination of ripe fruit and spice flavors, low tannin and high acid make Pinot Noir one of the most food friendly wines in the world.
END_OF_DOCUMENT_TOKEN_TO_BE_REPLACED

Sineann lost a couple of it's best vineyard sources but this vineyard seems better than ever.  Of course, this is a reserve bottling.  Medium/dark ruby in color.  The nose has cherries, sour cherries, baking spices, and cedar.  A slight dry earthiness comes out with air.  On the palate, this has a wonderful texture.  Sour cherries and cherries over spices with slight char.  Good finish.  This is a delicious wine.  It has a nice depth but will need to be aged a bit to show some delineations.  It will continue to get better for the next five years or so and be good for ten to fifteen after th IntoWine recently asked its panel of wine experts to recommend one Oregon pinot noir worth seeking out: Oregon’s Willamette Valley sits at roughly the same latitude as Pinot Noir’s ancestral home—France’s Burgundy region. While there are significant differences between the two regions in terms of soils and topography, the fact is that both are essentially cool climate, slow ripening regions that are ideal for producing flavorful and balanced Pinot Noir. Pinots from Oregon tend to have some of the delicacy and minerality that red Burgundy is known for as well as some of the ripe red fruit most typically found in California Pinot. Their alcohol levels are generally much closer to those of France (13% or so) rather than California (typically 14-15%). Many of them also exhibit a savory aroma reminiscent of forest floor or underbrush, what the French call “sous bois.” For me the most impressive Oregon Pinot Noirs in recent tastings, with wines I rated 92 points or higher, have come from Archery Summit, Belle Pente, Domaine Drouhin, Evening Land, Rex Hill, Roco, Scott Paul and Shea Wine Cellars. The best values among these wonderful examples are the 2009 Belle Pente ($35), the 2010 Evening Land Seven Springs Vineyard ($40), Scott Paul’s delicious 2010 La Paulée ($32) and Shea Wine Cellars’ 2010 Estate ($40). At an even more affordable price level, look for Coeur de Terre’s $20 2010 Pinot (89 points) and Patton Valley’s $20 2009 “Declassified” (89 points). Richard Jennings, IntoWine.com Featured Contributor and the Founder RJonWine.com.
END_OF_DOCUMENT_TOKEN_TO_BE_REPLACED

Purple/ruby in color, ruby at the rim.  The nose has black cherries with slight sour cherries and sandalwood.  On the palate, this is a big Pinot on Oregon standards.  Sour cherries, some underlying char.  Full bodied.  Slight tannins.  This should work well with medium bodied and heavier foods.  Think Salmon, game, etc.  Screw capped.  It is still young and should improve a bit.  Drink over the next ten years.