This Super Tuscan is a blend of 80% Sangiovese, 15% Cabernet Sauvignon, and 5% Cabernet Franc.  Garnet in color, mostly clear and bright.  The nose is great with cherries, chocolate, dust, black cherries, spice and tobacco.  Full bodied.  Juicy acidity.  Great plush texture.  Firm tannins.  On the palate, black cherries, char some forest floor notes.  Young but complex and deep.  Delicious.  This is great on its own but even better with food.  It worked well with mushroom ravioli.  It certainly can be drunk now and for the next twenty years.

Super Tuscan wines can be expensive and, let's face it, with the Euro kicking the Dollar's butt, finding a Super Tuscan that doesn't break the bank can be a challenge. IntoWine.com asked our panel of wine experts to recommend the best Super Tuscan "Value" wines: A Sangiovese-less Super Tuscan!?!? Specifically I suggest the 2003 Rocca di Montegrossi "Geremia". I know, I know. There’s no Sangiovese in this Super Tuscan! It’s 60/40 Merlot and Cabernet Sauvignon, respectively. And truly, it is a brutish wine, filled with tannin and body and yet there is a substantial amount of finesse. The 2003 vintage was a beauty for Northern Italy, unlike 2002.
END_OF_DOCUMENT_TOKEN_TO_BE_REPLACED

Beautiful showing for this wine albeit young.  A blend of 80% Sangiovese, 15% Cabernet Sauvignon and 5% Cabernet Franc.  Deep garnet in color, mostly opaque and bright.  The nose has cherries, black cherries, sandalwood, and slight anise.  Full bodied.  Medium to firm tannins.  On the palate, this is delicious.  Cherries, black cherries and spice with underlying char and slight tea.  With air, a bit of tobacco.  Layers of flavors, deep and complex.  This should continue to improve for the next five to eight years.  It will drink well over the next ten to fifteen. 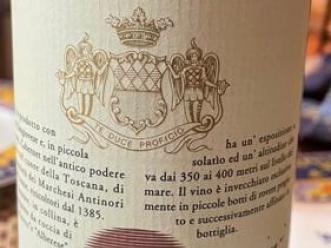 Some of the great wines in Italy, and the world, hail from Tuscany. Other articles have discussed Super Tuscans , and some of the great wines based on the Sangiovese grape including Chianti and Brunello di Montalcino . In this article, another great Sangiovese based wine is explored: Vin Nobile di Montepulciano. The name of this wine can be confusing. Long ago these wines became the chosen wine of nobility hence the Nobile part of the name.
END_OF_DOCUMENT_TOKEN_TO_BE_REPLACED

In a previous article, we examined Brunello’s 100 plus year history . In Italian wine expressions, that is a relatively short period. Nevertheless, Brunello has established itself as one of the premium wines, not only in Tuscany, but also in the entire world. Brunello di Montalcino has an even more brief history in Italy’s wine regulations. Brunello did not become a DOC until 1966 and has only been a DOCG since 1986. Brunello’s DOCG regulations require that 100% Sangiovese grapes be used. The wines are then aged for a minimum of 4 years (5 years for the Riserva). Traditionally, Brunello required a minimum of three years ageing in wood barrels. That has now been relaxed to two years ageing in wood. In addition, four months must be in bottle (six for the Riservas). The finished wine cannot be released for sale until January 1st of the year five years from vintage year. For example, the 2003 Brunello’s could not be released until January of 2008. Geographically, there is a strictly identified zone surrounding the town of Montalcino, in which the Sangiovese grapes used to make Brunello must be grown and the wines must be bottled. So what type of experience should a good Brunello provide? This simple question is controversial at the moment. Traditionally, Brunello, like other Sangiovese wines, is a pale ruby color. The wine is transparent in the glass with lovely perfumed aromas of cherries and floral notes. It has a powerful elegance about it.
END_OF_DOCUMENT_TOKEN_TO_BE_REPLACED