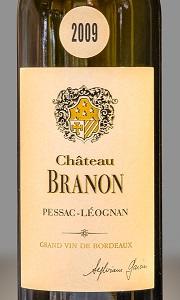 A blend of Merlot and Cabernet Franc.  Purple in color, opaque and bright.  The nose has cherries, cassis and coffee.  On the palate, this has a nice depth and complexity.  Cassis fruit layered with spice and slight earthiness.  Soft texture.  Medium tannins.  Good finish.  This is a very pretty wine that just now seems to be closing in on peak.  There is some more upside to this wine.  It will work well with roasts or grilled foods.

When the wines of Bordeaux were classified in 1855 all of the wines were from the Left Bank of the Gironde River. In fact, with the exception of Haut Brion, which is from Graves, all of the wines classified were from the Medoc. Since that time, the winemaking areas of Bordeaux have greatly expanded. Some of the best wines in Bordeaux are now made on the Right Bank including some of the most expensive wines in the entire world. While there is no official classification system for all of Bordeaux, there can be no doubt that if such a system was implemented today, at least a few Right Bank wineries would make the list. Perhaps no winery deserves the mythical first growth of the Right Bank title more than Cheval Blanc. In fact, the wines of Saint Émilion, a commune on the Right Bank, were ranked in 1955 and Cheval Blanc was one of two that received the highest rank of Premier Grand Cru Classé (A). Those rankings were redone in 1969, 1986, and 1996 and most recently in 2006 (although that ranking is the subject of an ongoing legal dispute not relevant to Cheval Blanc) and Cheval Blanc has remained a First Growth in every subsequent ranking.
END_OF_DOCUMENT_TOKEN_TO_BE_REPLACED

This is  50% Cabernet Sauvignon, 41% Merlot and 9% Cabernet Franc.  A gorgeous wine that is still very young.  Purple in color, ruby at the rim.  The nose is pretty classic for Haut Brion with cassis, crushed gravel, slight asphalt and strawberries.  On the palate there are silky but firm tannins.  Deep and complex, the layers unwind in the glass.  Cassis and black cherries, slight strawberries over gravel and earth.  Great balance.  Long finish.  This needs  another ten years to maturity and should be there for a couple more decades after that.  It is delicious right now but give it air. When I think of wine that is interesting, unique, obscure, high-value, and small-production, I think of Borgueil – the small wine region in France’s Loire Valley that produces almost exclusively Cabernet Franc.
END_OF_DOCUMENT_TOKEN_TO_BE_REPLACED

This is 51% Cabernet Sauvignon, 43% Merlot, and 6% Cabernet Franc.  This was one of the least expensive wines in this magnificent tasting and really stood toe to toe with all of them.  Purple in color.  The nose has cassis, smoke, graphite and minerals.  Very expressive if not huge.  On the palate, there is a wonderful texture.  Cassis with layers of minerals and char.  Great balance.  Long finish.  This really took some time to open in the glass but then just kept getting better.  It seems like it will need another decade to fully mature and then have a couple more after that (which seems Its hard to believe that a First Growth can exceed expectations, but this one did.  From a good not great vintage, this wine was tremendous.  Purple/ruby in color.  The nose is great with cherries, chocolate, and slight tobacco.  A soft texture that makes the wine very accessible.  Some silky tannins.  This is delicious.  Young but open.  Cherries and milk chocolate on the palate.  This will work with heavier foods.  This should get better over the next couple of decades, but it is great right now.