This wine showed quite well considering the vintage and pedigree and age of the wine.  Ruby in color, purple at its core, clear and bright.  The nose has dried cherries, slight dust, a bit of mint.  With air, some fresh cherries.  On the palate, fresh and dried cherries above a baseline of tea leaves.  Medium bodied.  A bit of drying tannins underneath.  Nice finish.  This is very food friendly and easy to drink.  Probably a bit past prime but still enjoyable.  Drink up now.

When the wines of Bordeaux were classified in 1855 all of the wines were from the Left Bank of the Gironde River. In fact, with the exception of Haut Brion, which is from Graves, all of the wines classified were from the Medoc. Since that time, the winemaking areas of Bordeaux have greatly expanded. Some of the best wines in Bordeaux are now made on the Right Bank including some of the most expensive wines in the entire world. While there is no official classification system for all of Bordeaux, there can be no doubt that if such a system was implemented today, at least a few Right Bank wineries would make the list. Perhaps no winery deserves the mythical first growth of the Right Bank title more than Cheval Blanc. In fact, the wines of Saint Émilion, a commune on the Right Bank, were ranked in 1955 and Cheval Blanc was one of two that received the highest rank of Premier Grand Cru Classé (A). Those rankings were redone in 1969, 1986, and 1996 and most recently in 2006 (although that ranking is the subject of an ongoing legal dispute not relevant to Cheval Blanc) and Cheval Blanc has remained a First Growth in every subsequent ranking.
END_OF_DOCUMENT_TOKEN_TO_BE_REPLACED

It is always a treat to drink a mature First Growth.  This is fully mature and drinking beautifully.  12.5% abv according to the importer sticker on the bottle.  Purple/ruby in color with some browning at the rim, mostly clear and a bit flat.  The nose is dusty with cassis and tobacco.  With air some dried fruits come out.  Medium bodied.  On the palate, this has a vibrant acidity.  Nice cherry and black cherry fruit with some cassis.  Layers of complexity.  Fruit over spice and dried forest floor.  Nice finish.  This begs for food and went well with a roasted Brie but would work well with 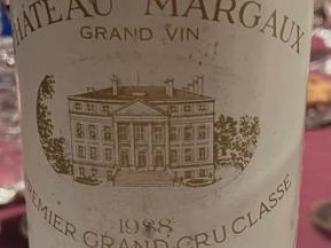 The first bottle that we opened was corked.  A second bottle proved quite fresh indeed.  This was a surprise as it showed quite well.  Still, in the older style.  The label was actually in very good shape as well.  Purple in color with just a slight bit of bricking at the rime.  Clear and bright.  The nose has cherry fruit, with a slight bit of funk.  With air it becomes a bit more cigar box.  On the palate, this is clean and fresh.  Certainly mature but nice cherry fruit, just a wisp of tannins with underlying barnyard.  The finish is a bit drying.  Older wines can be a gamble, mostly due When I think of wine that is interesting, unique, obscure, high-value, and small-production, I think of Borgueil – the small wine region in France’s Loire Valley that produces almost exclusively Cabernet Franc.
END_OF_DOCUMENT_TOKEN_TO_BE_REPLACED

This was opened and poured and enjoyed over six hours.  It is still young and really hit its stride after around four hours though the last glass was the best.  A wonderfully delicious wine.  Deep purple in color; shiny, bright and opaque.  The nose is great with black cherries, dark chocolate, slight soy, plum and char.  On the palate, this still has firm tannins though they are not overwhelming.  Lots of black cherry fruit with some underlying gravel and also some chocolate.  This is not a baby at age 15, but still needs about ten years until peak.  The finish is long, smooth and has a ni