Q&A with Allen Meadows of Burghound.com 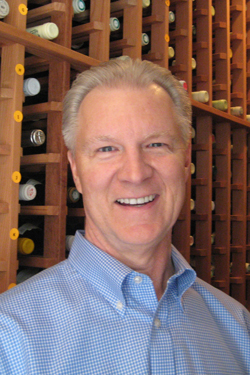 Allen Meadows, author of Burghound.com, a highly respected and critically acclaimed quarterly publication that reaches subscribers in more than 60 countries and nearly all 50 states. Burghound.com was the first of its kind to offer specialized, exhaustive coverage of a specific wine region and grape, he and pioneered the on-line format. There are reviews of the wines of Burgundy and U.S. Pinot Noir, as well as coverage of Champagne. Subscribers have access to a fully searchable database of nearly 60,000 of Meadows’ tasting notes with recommended drinking windows for present day vintages all the way back to 1845. Meadows spends four months every year in Burgundy and visits more than 300 domaines during that time. He is also the author of “The Pearl of the Côte – The Great Wines of Vosne-Romanée.”

Why the fascination with Pinot Noir/Burgundy?

Because it is capable of creating wines of unmatched transparency of place that deliver wonderful elegance and refinement. And when the producer gets it just right, it produces a complex and emotional drinking experience that no other grape variety can match.

Why does this grape differ from other varieties so dramatically, and is its moniker as "finicky" an appropriate label?

I’m not sure that anyone knows exactly why pinot differs so dramatically from other grape varieties. It’s possible that it’s due to the fact that pinot is one of the most ancient of all varieties, though as an explanation it is only supposition on my part. As to finicky, that’s more easily explained as it’s difficult to grow because its thin skin makes is susceptible to all manner of grape maladies. It also doesn’t produce anything interesting at higher yields, which makes it among the most expensive of all varieties to grow successfully.

Wine alcohol levels are on the rise and it is commonplace to see 15 percent wines from Chardonnay to Merlot. Even Pinot Noirs are over 14 percent. What's your take on alcohol levels these days?

Alcohol has become a bit of a whipping boy for excess ripeness and the overt extremism in some wines today. Yes, generally speaking, the higher the ripeness levels the higher the associated alcohols but some wines can carry the higher alcohols without unbalancing the wine. But most cannot and what is worse is that even wines where the alcohol doesn’t prominently stick out, there is almost always noticeable finishing warmth, particularly in pinot noir because of its tendency to produce highly transparent wines. Such wines are typically dramatic but if the goal is to enjoy more than one glass with food, then they’re usually tiring to drink. In brief, I am very much against high alcohol wines but I wish to underscore that it’s not only the alcohol that’s the problem; it’s more typically all of the excess ripeness, extraction and heavy oaking that accompanies the elevated alcohol that contributes significantly to something that is borderline undrinkable.

Describe the fundamental differences between California Pinot Noir and Burgundy.

It’s unduly simplistic but at present, California pinot is generally about opulence, fruit and sunshine and Burgundy is more about structure and texture. This is slowly changing as the age of vines in California increase and vintners become ever more familiar with their terroirs, which is all to the good. But the two regions produce pinot-based wines that are materially different from one another and the world of wine is much richer for it.  California or Oregon should no more be trying to emulate Burgundy than Burgundy should be trying to emulate them.

What are the specific places in France that you believe produce consistently excellent Burgundy?

This is a very difficult question to answer because there are so many.

Outside of France and the U.S., what other countries do you see as being able to make good to excellent Pinot Noir?

Well, it’s already clear that the U.S. has achieved excellence from both Oregon and California. New Zealand is also making exceptional progress. Two other countries that have produced notable pinots are Canada and Australia though in both cases it remains to be seen whether they can do this consistently. I should point out that today we are really only seeing the products of 30 years or so of intensive effort whereas Burgundy is the result of literally some two thousand years of experimentation, adaptation and refinement.  Thus it is early, but it would be fair to observe that the initial results seem more than just promising.

Has the global success of Burghound surprised you and if so, why?

Yes, it most definitely has and indeed when I started Burghound some 12 years ago, I honestly never imagined that it would enjoy such success. But I do believe that the reputation of Burghound is a reflection of three primary things: the first is that pinot lovers are a highly passionate bunch and always eager for more information; second is that in a world of generalization, there is a need for specialized voices; and the third is how powerful a communication tool that the Internet has become.

For someone just starting to enjoy Burgundies, what is the best advice for steering them through the mass of wine of the shelves in order to find something wonderful?

At the risk of sounding self-serving, the Burgundy neophyte needs a good guide, be it a source like Burghound or the advice of a good mentor such as a sympathetic retailer or fellow wine friend. It’s easy to make (expensive) mistakes and thus good guidance is essential.

Since you also cover Champagnes, why is it that many Americans still only drink Champagne for special occasions and how do you educate them to incorporate it into their usual drinking routines?

I don’t think that it’s exclusively Americans that consider bubblies to be reserved only for special occasions as I have visited many, many countries where such views are the norm.  While what you say is true among Americans who really don’t drink much wine, more educated wine lovers understand that Champagne can be enjoyed anytime. While I do occasionally point out examples that might successfully be paired with food, most Champagne in my experience is better served as an aperitif unless it is well-aged. And there you enter into the realm of acquired taste because not everyone enjoys aged Champagne.

It's been a long day and you're finished working. What might be one of your ideal dinners and with what ideal wine?

For me, it’s less about a particular food or wine than a marriage of food and wine that allows the attributes of both to be appreciated. Thus I tend to choose simple foods like grilled chicken or salmon that I accompany with a pinot-based wine of 5 to 15 years of age. Despite popular perception, I don’t drink Grands Crus all the time and even if I could, I wouldn’t. A great wine of whatever stripe requires the drinker to be engaged and if, as your question suggests, that is has been a very long day, then something that is satisfying, well-made and honest is what suits me the best. And such wines can usually be found from more modest appellations.

If you are a wine lover, wine connoisseur, wine aficionado or even if you just like to have a couple of glasses on a Friday night, it soon becomes obvious that there are some wines that are held in a higher esteem in the wine world. Sometimes, it is because these wines are very rare. Other times, it’s because the wine has a place in history. Sometimes it’s because the wine is just that good. Here is a list of 75 wines from France that make up that category. A few caveats. I have not tried every wine on this list. Some I have and others I hope to. Many of these wines are rare and hard to find. That doesn’t mean they shouldn’t be on the list. After all, if the opportunity presents itself, go for it.
END_OF_DOCUMENT_TOKEN_TO_BE_REPLACED

France's Burgundy Wine Region: A Primer on the History, Wines, Vineyards & Terroir contains an excellent introduction into the ethereal wine of one of the most famous wine producing regions. No winery is more famous, or produces such legendary wines in Burgundy than Domaine de la Romanée-Conti. Often abbreviated as DRC, the winery makes some of the most exclusive and expensive wines in the world. They are, for those lucky enough to have tried them, the pinnacle of Pinot Noir and Chardonnay.
END_OF_DOCUMENT_TOKEN_TO_BE_REPLACED

There is a saying among wine aficionados that on the journey to wine understanding, all roads eventually lead to Burgundy. I am not sure I agree with that as my heart seems to be in Italy, but there is no denying the impact that Burgundy has had on the wine world and that some of the most ethereal wine experiences one can have come from Burgundy wines. Many tomes have been written on the subject but the purpose of this article is to give a basic primer on the subject and eventually delve deeper into the Burgundy experience in subsequent articles.
END_OF_DOCUMENT_TOKEN_TO_BE_REPLACED

Founded in 1980, Boisset Family Estates is a family-owned producer and importer of fine wines with its roots in Burgundy, France. Boisset’s collection of more than twenty historical and unique wineries boast leading positions in the world’s pre-eminent terroirs, including Burgundy, Beaujolais, the Rhône Valley, the South of France, Canada, and California’s Russian River Valley and Napa Valley. Jean-Charles Boisset, President of Boisset Family Estates, has implemented sustainable, organic, and biodynamic farming practices at the family’s vineyards, while simultaneously introducing alternative packaging innovations that reduce a wine’s environmental impact and carbon footprint.
END_OF_DOCUMENT_TOKEN_TO_BE_REPLACED

There are few people who have thought harder or more comprehensively about where the French wine industry has been and where it is heading than author Andrew Jefford. In his book, The New France , Jefford delves deep into seemingly every angle of importance regarding French wine. The reviews have been uniformly exceptional.
END_OF_DOCUMENT_TOKEN_TO_BE_REPLACED