Getting Zapped: Zinfandel Comes of Age 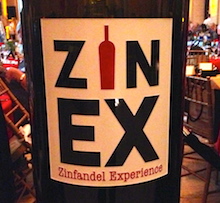 Zinfandel is considered “America’s grape” because it was widely planted when the California wine industry began to grow in the mid to late 1850s, but it is not, however, a truly American grape; it’s an immigrant – it originally came from Europe. Though heavily planted in California, you see far too many iterations that are all jammy fruit and sweetness. Nothing wrong with that, but Zinfandel can also be elegant, structured, earthy and subtle; a wine of diversity breaking away from typical Cabernet/Merlot flavors, and nothing like Syrah at all. But most people’s perception is Zin as a pizza and burger wine. Oh, the horror. Yes, I’m a ZinFan. And any ZinFan should really attend the annual ZinEx - the Zinfandel Experience - in San Francisco, as I did in February 2017 to get a well rounded, truly authentic look (and taste) into how diverse and exceptional Zinfandel can be.

ZinEx is like most multi-day festivals; there are special “flight” tastings with older vintages (I had some 2002, 2004, 2007 vintages), winemaker dinners, an evening auction, and grand tasting. But what sets this apart is the near fanatical nature of Zinfandel fans. You don’t really get this from Cabernet or Pinot - sure there are die-hards – but Zinfandel excites a primal sense in wine lovers; there’s something nearly visceral, emotional and instinctual. During ZinEx there were events at the terrific One Market Restaurant (including some of the best calamari I’ve had outside of Crete), the Bentley Reserve (formerly the San Francisco Federal reserve bank) not to mention the Grand Tasting held at Pier 27 overlooking the San Francisco Bay, which saw more than 1,500 attendees. Over the course of that day, over 20,000 appetizers from 18 artisan purveyors and chefs were available – of which I had maybe five or six, which reminds me to eat more next year. Rounding out the afternoon were more than 600 different Zinfandels poured from California growing regions and appellations from diverse places including Mendocino, Redwood Valley, Lake County, Napa, Sonoma, El Dorado, Amador County, Shenandoah Valley, Calaveras County, Lodi, Contra Costa, Livermore, Paso Robles, and as far south as Cucamonga. So if you are addicted to Zinfandel, or if Zinfandel is still something of a mystery, a visit to ZinEx will open your mind and your palate to California’s First Grape, so do check it out. www.ZinfandelExperience.com

My Top Zinfandel Finds at ZinEx/2017:

The wine business is a fickle mistress. Winery owners and winemakers chase elusive scores, the public makes buying decisions based on movies, hype and price, and critics seem to applaud fruit laden, high octane wines. So where does that leave Dashe Cellars in Oakland, CA? Right where they want to be.
END_OF_DOCUMENT_TOKEN_TO_BE_REPLACED

I tend to taste and drink a lot of wine over the course of a year. I am in a few tasting groups, sometimes the wines are consumed at various local wine store tastings and a number drunk with friends and family.
END_OF_DOCUMENT_TOKEN_TO_BE_REPLACED

Zinfandel—the grape Americans call their own. The story of Zinfandel mirrors the multicultural heritage of our country and the struggle of immigrants to make it in a new land. From white to red and sweet to dry, this is a grape that has been reinvented to suit the changing tastes of wine consumers across the country. Originally from Croatia, the grape showed up in the US with Italian immigrants in the 1800s (who called it, as it is still known today in Italy, Primitivo). More than a century later it was nearly extinct with vines ripped up in favor of international varieties like Cabernet Sauvignon and Chardonnay. But the huge popularity of white Zin in the 1980s and 1990s saved the grape from obscurity and nowadays the finest expression of Zinfandel comes not from Croatia or Italy but from California where it is produced as a dry red wine that can be light bodied and chockfull of ripe fruit or rich and inky with high alcohol and port-like characteristics.
END_OF_DOCUMENT_TOKEN_TO_BE_REPLACED

Best Zinfandel (For the Money)

IntoWine.com asked our wine experts to recommend the best value Zinfandel. Here are there top picks for a good bottle of Zinfandel at an affordable price point: In January I attended the ZAP (Zinfandel Advocates and Producers) festival at Fort Mason in San Francisco. Hundreds of producers poured...
END_OF_DOCUMENT_TOKEN_TO_BE_REPLACED