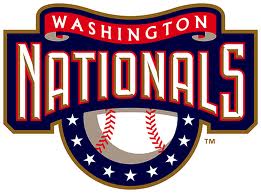 What's an appropriate wine to serve at a Washington Nationals themed party? What wine would be a good gift for a hard core Nationals fan?

The Washington Nationals may not be the newest team in Major League Baseball – that honor is shared by the Tampa Bay Rays and the Arizona Diamondbacks – but when Liván Hernández threw the Nationals' first pitch on April 5, 2005, the team left its past behind forever.  The team first formed in 1969 as the Montreal Expos, but when the Expos moved to Washington, DC after the 2004 season ended, they quickly and wisely embraced their future in the U. S. capital, donning patriotic red, white and blue and displaying the signature "Curly W" everywhere.  In return, Washingtonians enthusiastically embraced them, building a classy new ballpark and patiently waiting out the team's rebuilding efforts.

It's been a tough wait.  The Nationals have struggled every season, often finishing last in their division.  Sluggers Ryan Zimmerman, Ian Desmond, Michael Morse and Jayson Werth, joined in late 2011 by Chris Marrero, have faced disappointment game after game, as pitching and defensive efforts have fallen short.  Injuries have plagued the team; pitcher Chien-Ming Wang's recovery from shoulder surgery took two years, and rookie pitching phenomenon Stephen Strasburg started in just six Nationals games before undergoing Tommy John surgery in 2010.  Their much-anticipated returns late in the 2011 season gave the team a much-needed boost.

Despite the team's setbacks, Nationals fans truly enjoy having a team in the heart of the District of Columbia.  Nationals Park, designed to fit in with the District's unique architectural theme, features locally-owned concessions, including presidential favorite Ben's Chili Bowl, views of the Capitol dome and easy access to public transportation.  On game days, Metro trains are packed with Nationals fans heading to the ballpark.  Washingtonians waited 33 long years after the second Senators team moved to Texas, and they continue to support the Nationals and hope for a brighter future.

Given the Nationals' emphasis on local food and beverage concessions, it only makes sense to pour a local wine for your favorite Nats fan.  Fortunately, the nearby Northern Virginia Wine Region offers plenty of options, as there are 68 wineries to choose from.

Paradise Springs Winery is the winery closest to Nationals Park.  Located in Clifton, Virginia, Paradise Springs takes its name from nearby mineral water springs.  Grapes were first planted in the area in 1868, but it was not until Paradise Springs' owner, Jane Kincheloe, and her son, Kirk Wiles, decided to open a winery on family land in Clifton that vineyards once again became part of the Fairfax County landscape.  The winery property includes a cabin that dates back to the early 1800s.  The cabin was remodeled in 1955 by one of Frank Lloyd Wright's protégés; at that time a wine cellar and modern utilities were added.  Paradise Springs Winery's 2009 and 2010 Chardonnay both won the Governor's Cup for best white wine in the Commonwealth of Virginia; if you'd like to try the 2010 Chardonnay, expect to pay about $29 per bottle.  The 2008 Reserve Cabernet Sauvignon won a gold medal in the 2010 Virginia Wine Lover Classic; you'll pay about $23 per bottle.

South of Washington, you'll find Potomac Point Vineyard and Winery in Stafford, Virginia.  Like many wineries in Virginia, Potomac Point offers not only tours and tastings, but special events, concerts and even meals in its on-site Bistro.  You can bring a picnic lunch or order a picnic basket from the Bistro and enjoy an outdoor meal at the Picnic Pavilion or at the Picnic Ground.  Potomac Point Vineyard and Winery's 2008 Cabernet Franc won gold at the 2010 Governor's Cup; it retails for $23.  The 2009 Richland Reserve Viognier won a silver medal at the 2010 Decanter World Wine Awards.  Expect to pay $25 per bottle for this award-winning wine.

West of the District, Chrysalis Vineyards in Middleburg, Virginia is the world's largest grower of the Norton grape varietal.  The Norton grape was very popular in the US and Europe, winning accolades at the 1873 Vienna World's Fair, but Prohibition shut down all Norton production in the US.  Owner Jennifer McCloud continues to expand her plantings of Norton; Chrysalis Vineyards currently grows more than 20 varietals, but Norton takes pride of place.  The winery hosts the Norton Wine and Bluegrass Festival each year, and Chrysalis Vineyards currently sells its 2010 Norton – Barrel Select ($29), 2008 Norton – Locksley Reserve ($35) and 2008 Norton – Estate Bottled ($17).  Sarah's Patio Red, a rosé wine ($15), is also made from 100 percent Norton grapes.  If you visit the winery, consider bringing some meat to cook on the gas grills in the picnic area.  Chrysalis Vineyards also offers a special families-only picnic area for visitors with children.

Breaux Vineyards in Purcellville, Virginia, was named "Virginia's Favorite Winery" in Virginia Wine Events' reader polls in 2008, 2009, 2010 and 2011.  The Breaux family is especially proud of earning this honor.  The winery, which began as a Breaux family hobby, currently produces about 10,000 cases of wine per year.  Breaux Vineyards 2009 Equation Merlot "X", a merlot and petit verdot blend, won a gold medal at the 2010 Tasters Guild International Wine Competition, as did the 2008 Viognier.  The Viognier is sold out, but you can find Equation Merlot "X" at a variety of Virginia retailers for about $15 per bottle.

No discussion of Virginia wine – or Virginia history, for that matter – would be complete without mentioning Philip Carter Winery of Virginia and the Carter family's legacy.  Wine grapes were planted in Virginia as early as 1608, and by the mid-1700s, Charles Carter, son of the legendary Robert "King" Carter, was growing grapes on Cleve®, his plantation in Virginia's King George County, and writing to the Society for the Encouragement of the Arts, Manufacture and Commerce in London, England, about the opportunities for winemaking in the Virginia colony.  In 1762, he sent some of his own wines from Cleve® to the Society, and they, in turn, sent him a gold medal in recognition of his efforts.  Fast-forwarding about 245 years, direct Carter descendant Philip Carter Strother worked, along with other Virginians, to promote passage of legislation that allowed farm wineries to open and operate within the Commonwealth.  In 2008, he opened his own winery, Philip Carter Winery of Virginia.  In the years since, Strother has planted more and more grapes and worked tirelessly to support Virginia's burgeoning wine industry.  And, as you might expect, he has made some award-winning wines along the way.  The 2009 Philip Carter Winery of Virginia Cabernet Franc won a gold medal at the 2010 State Fair of Virginia, while the 2008 Chardonnay won gold at the 2010 San Francisco Chronicle Wine Competition.  You'll pay about $23 for a bottle of the Cabernet Franc.  The Philip Carter Winery of Northern Virginia hosts not only traditional tours, tastings and art shows but also more eclectic events, including fencing tournaments.

The winery owners and winemakers of Northern Virginia, like the Washington Nationals' owner, coaches and players, enjoy a shared heritage that stretches back over many years, but also plan for future events and accomplishments.  Nationals fans will surely understand and celebrate the Northern Virginia Wine Region's focus on the many good things that are sure to come.

We recently drank our way through Woodinville Passport 2008, in the ever-burgeoning Woodinville wine region just outside of Seattle, Washington. Here, we experienced wine tasting in warehouse office parks – and never was a more true and honest passion for wine represented without all the fancy mahogany tasting bars, and retail swag you find in other wineries. With a little help from some Woodinville winemakers, I share with you my top tips for how to attack a wine tasting festival.
END_OF_DOCUMENT_TOKEN_TO_BE_REPLACED

What's an appropriate wine to serve at a Seattle Mariners themed party? What wine would be a good gift for a hard core Mariners fan? The Seattle Mariners first took the field in 1977, after the city's former baseball team, the Pilots, moved to Milwaukee. The Mariners are owned by Nintendo of America and have the unfortunate distinction of never having played in a World Series. Nevertheless, Mariners fans proudly stand by their team; fan loyalty is one of the team's greatest assets.
END_OF_DOCUMENT_TOKEN_TO_BE_REPLACED

Wine Charities: For the Love of Wine

Since grade school we’ve all heard the fatigued proverb, “It’s better to give than to receive.” Most of us wouldn’t argue with that, at least not publicly. Privately however, well, who doesn’t want free stuff? In truth, the wine industry is a magnanimous group, routinely called upon to provide free juice for charity auctions, public and private tastings, festivals and most anyplace where wine is poured and people want to imbibe at little or no cost. These three west coast wineries showcase the dedication of making wine, making changes, one bottle, and one person at a time.
END_OF_DOCUMENT_TOKEN_TO_BE_REPLACED

Throughout a winemaking career spanning two decades, three continents and with experience gleaned from working at wineries like Woodward Canyon, Chateau Ste. Michelle, Rapaura Vintners, and Bookwalter, Caleb Foster has established himself as one of Washington State’s best winemakers. As the winemaker for Buty, which he founded with his wife, Nina Buty Foster in 2000, he has created an acclaimed portfolio of Washington State wines that includes several pioneering blends, and are some of the defining wines of Washington winemaking.
END_OF_DOCUMENT_TOKEN_TO_BE_REPLACED

Washington Wines and Wineries Author Paul Gregutt It is hard to believe a person exists who has thought more deeply and comprehensively about Washington wine than wine writer Paul Gregutt . Based in Seattle, Gregutt wine writings appear in a slew of Washington publications including the Seattle Times, Yakima Herald-Republic, Walla Walla Union-Bulletin, Pacific Northwest Magazine, and the Spokane Spokesman-Review . He is also a Contributing Editor and the Northwest wine reviewer for Wine Enthusiast magazine. His new book, Washington Wines & Wineries – The Essential Guide , is the authoritative guide to Washington wine. I recently caught up with Paul to discuss the book and his views on Washington wines.
END_OF_DOCUMENT_TOKEN_TO_BE_REPLACED