Four centuries of history are united in the spare appellation Chateau d'Yquem Lur Saluces, -a label that evokes the same reaction the world over- of a luminous golden essence, of royalty, of impassioned devotees and collectors, and of the finest, the rarest, and the most expensive of wines. 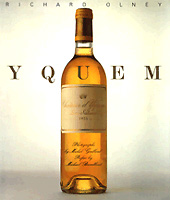 Yquem is a Sauterne, but classifying it as such is akin to calling a vintage Bugatti an old car. It is the finest of the Sauternes because every grape is literally picked by hand, having succumbed to la pourriture noble, the noble rot, a parasitic fungus that dramatically alters the chemistry of the grape, consuming one-third of its sugars and five-sixths of its acids. It is this change in chemistry that begets the unforgettable color, texture, and flavor of the finished wine. It is the most rare -not only of Sauternes, but also of all wines- because only 240 acres are under cultivation, limiting production to roughly 66,000 bottles per year. It is the most expensive because every step in the arduous processes of pruning, grafting, picking, selecting, fermenting, bottling, and shipping is done by hand, and done in the same time-consuming, fastidious manner practiced over generations.

Richard Olney, who sadly died just after this revised edition was published in France, was a master cook with an expert's knowledge of wine and a superlative writer whose prose was as civilized as his palate. He explores every aspect of this culture in this new and reset edition. This is, as might be expected, a deluxe volume on a deluxe subject, illustrated with exquisite color photographs of the vineyard, the austere landscape of the Graves, and the personalities who have, in often nervous alliance with nature and the noble rot, produced for over two hundred years a liquid amber of such smoothness, lushness, and distinction that it has always been known as "the king of wines."

About the Author
Richard Olney was born in Marathon, Iowa, and lived in France since 1951. A renowned authority on French cooking, he was the author of numerous cookbooks, including The French Menu Cookbook--and the awardwinning Simple French Food. Olney was also chief consultant on the Time-Life series, The Good Cook. Equally well-known as a wine writer, he is the author of Romanee-Conti and Yquem which received the Prix Litteraire des Relais Gourmands 1986. Olney is a member of L'Acadmie Internationale du Vin and other wine and food organizations. In 1992, he received le Prix de I'Acadmie du Vin de France "pour l'ensenmble de son oeurve et de son action iternationale en faveur du vin."

Each year at 12:01 AM on the third Thursday of November, millions of bottles of Beaujolais Nouveau begin a journey from a little French village to locales across the globe. Wine stores and cafes enthusiastically greet these shipments with signs and banners proclaiming "Le Beaujolais Nouveau est arrivé!" "The New Beaujolais has arrived!". With this begins the annual celebration of the arrival of the French wine Beaujolais Nouveau, a celebration steeped in tradition, frivolity, grandeur, legend, and of course, fabulous wine.
END_OF_DOCUMENT_TOKEN_TO_BE_REPLACED

There are few people who have thought harder or more comprehensively about where the French wine industry has been and where it is heading than author Andrew Jefford. In his book, The New France , Jefford delves deep into seemingly every angle of importance regarding French wine. The reviews have been uniformly exceptional.
END_OF_DOCUMENT_TOKEN_TO_BE_REPLACED

Much of the history of wine is interwoven throughout the history of France itself. It is difficult to separate French wine from French culture and vice versa. There is no shortage of books devoted to French wine. The titles listed below are but a few of the many good books about French wine and culture. Champagne: How the World's Most Glamorous Wine Triumphed Over War and Hard Times , by Don and Petie Kladstrup, explores the history of champagne as it touches the historical figures and events that have defined France, and in some cases, the world. With references to Attila the Hun, Napoleon, and German World War II bombers it's hard to believe a wine region that has seen such hard times would ever produce the ubiquitous celebratory bubbly. The Wines of the South of France: From Banyuls to St. Raphael Yquem , by Rosemary George, examines the wines of Mediterranean France and argues that the region -not known particularly for wine in the past- is underestimated and on the rise, particularly in terms of Syrah and Grenache. Yquem is the finest of the Sauternes. The late Richard Olney, in his book Yquem , has delivered the essential book on the "first great vintage". Every region needs it authoritative guide to wine. Robert Joseph -wine correspondent for London's Sunday Telegraph newspaper- has delivered a French wine guide titled French Wines: The Essential Guide to the Wines and Wine Growing Regions of France that is worth lugging with you all around the French countryside.
END_OF_DOCUMENT_TOKEN_TO_BE_REPLACED

Champagne: How the World's Most Glamorous Wine Triumphed Over War and Hard Times by Don and Petie Kladstrup

From the time of Attila the Hun to the Germans of World War II, waves of invaders have tried to conquer the verdant region of Champagne in northern France. Yet this strife-torn land is also the birthplace of the world's favorite wine: champagne.
END_OF_DOCUMENT_TOKEN_TO_BE_REPLACED

Families of the Vine: Seasons Among the Winemakers of Southwest France by Michael S. Sanders

A few friends, a good meal, a glass of wine, what could be a more simple pleasure? Why then does the subject of wine -and particularly writing about wine- often seem so darn complicated, so needlessly technical or frustratingly pretentious? In this book I wanted to tell a different story about wine, share my experience of two years spent among French winemakers and vineyards; two years in which I discovered that the story of wine from vine to glass is as much the story of the people who make it, their history and traditions, their intimacy with the land, as it is a tale of yeast, grape, and barrel. Happily, it is also, in the small family vineyards where much French wine is made, a very warm, very human story.
END_OF_DOCUMENT_TOKEN_TO_BE_REPLACED