This a sparkling wine from the southwest corner of France.  It is a blend of 70% Chardonnay, 20% Chenin Blanc and 10% Pinot Noir.  It is an excellent value in sparkling wine.  Silvery gold in color, clear and bright.  There is a fair amount of small to medium sized bubbles making up the mousse.  On opening, this is a very aromatic wine.  There is an initial wave of limes and lanolin followed by minerals and baked apples on the nose.  Good acidity.  The palate has a nice roundness with baked apples and slight cherry notes.  This has moderate depth with light tannins.  It finishes long.  Overall, this drinks quite easy and works on its own but will ve very versatile with food.  It went very well with salty appetizers.  It is made to drink now so look for sources with fresh product and good turnover.

France's Burgundy Wine Region: A Primer on the History, Wines, Vineyards & Terroir contains an excellent introduction into the ethereal wine of one of the most famous wine producing regions. No winery is more famous, or produces such legendary wines in Burgundy than Domaine de la Romanée-Conti. Often abbreviated as DRC, the winery makes some of the most exclusive and expensive wines in the world. They are, for those lucky enough to have tried them, the pinnacle of Pinot Noir and Chardonnay.
END_OF_DOCUMENT_TOKEN_TO_BE_REPLACED

Bottle Shock On May 24, 1976, Steven Spurrier, a British wine merchant hoping to stoke sales at his French-wine-only shop, held a wine competition in Paris. In this competition French judges were invited to blind-taste top chardonnays and cabernet sauvignons from France and California. In an event that would later be dubbed the Judgment of Paris , the California wines –included merely to serve as the “sacrificial lambs” to the supposedly superior French wines- won the competition in a shocking upset. This singular event revolutionized the wine industry and put California on the map as a major world producer of fine wine. This story comes to life on the silver screen for the first time with the film Bottle Shock , starring Bill Pullman, Alan Richman, and Dennis Farina among other notables. I recently chatted with Bottle Shock Co-Writer and Producer Jody Savin about the film. Why this film now? To answer this question in a socio-political sense, I would venture to say that we live in challenging times.
END_OF_DOCUMENT_TOKEN_TO_BE_REPLACED

Had this at a local wine shop and was told it was a sparkling Vouvray.  I don't see that on the label as it appears to Vin de Pays though that is not on the label either.  The importers web site states that this is "Based heavily on Chenin Blanc with a dollop of Chardonnay" from vineyards in Touraine.  In any event, I love Chenin Blanc and thought this was a very nice sparkler.  How much one enjoyed it seemed to be directly tied to ones appreciation fro Chenin (at least at the store).  Light gold in color with some green streaks.  On the nose, this has a nice salinity with a bit of chalk, c Dosage is 8 grams per liter.  Silvery light gold in color.  A nice amount of smaller bubbles.  The nose has seltzer and gun powder.  On the palate, this is lively. Plenty of a (red) apples with a tart sourness that is very nice.  A reasonably long finish.  This is an affordable Champagne that is very user friendly.  It will work well on its own and with just about any foods but especially salty foods.  This should be consumed within the first few years of release.  There was no disgorgement date on this bottle so purchase from stores with good turnover. First time trying this vintage and it is awesome if still young.  I hate to call it elegant as that is not correct, but it is the kind of wine that fans of the "less is more" philosophy of wine will love.  Light silvery/gold in color, clear and bright with a lot of tiny bubbles.  The nose is great with green apples, minerality, slight lanolin and chalk.  But it is not big, just intense.  The palate is similar.  At first taste, it seemed to be missing something, but it has an energy and persistence that keeps building.  Intensity without volume.  The green apple and minerality carry thru to 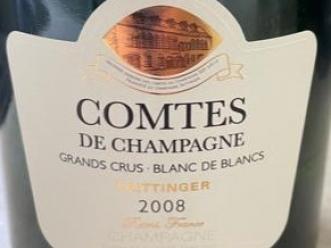