This is 80% Malbec and 20% Merlot from southwest France.  Purple in color, ruby swirls.  The nose is dusty with plums.  Some cherries come out later.  On the palate, this is a bit reticent.  Some cherries.  Firm tannins.  This could use a few years of cellaring.  Good acidity. Would work well with food especially heavier dishes.

In a way, Bordeaux is like the old British Empire. Although its dominance of the wine world has receded with the emergence of young wine regions like South Africa, South America, and Australia, the tentacles of Bordeaux’s influence are still seen in the character of wine all around the globe. Find Bargains on Cahors Wines Consider South America, a continent as distant from France geographically as it is culturally. The principle grapes used to produce South American red wine are not only mostly French, but often Bordelais in origin.
END_OF_DOCUMENT_TOKEN_TO_BE_REPLACED

From the Cahors region of southwest France.  In Cahors, Malbec is known as  "Côt", "Côt Noir" or "Auxerrois", so the fact that the label says Malbec tells us a lot about the intended market for this wine.  Not to mention that in other than in Alsace, naming a varietal on the label, is usually not a good sign.  Of course, its what is in the bottle that count.  Ruby in color.  The nose is dusty with cherry hard candy.  On the palate, this has sour cherry candy with slight plums.  Light tannins.  Good acidity.  A short to medium finish.  This is made to drink now, with BBQ or on its own.  Noth When the wines of Bordeaux were classified in 1855 all of the wines were from the Left Bank of the Gironde River. In fact, with the exception of Haut Brion, which is from Graves, all of the wines classified were from the Medoc. Since that time, the winemaking areas of Bordeaux have greatly expanded. Some of the best wines in Bordeaux are now made on the Right Bank including some of the most expensive wines in the entire world. While there is no official classification system for all of Bordeaux, there can be no doubt that if such a system was implemented today, at least a few Right Bank wineries would make the list. Perhaps no winery deserves the mythical first growth of the Right Bank title more than Cheval Blanc. In fact, the wines of Saint Émilion, a commune on the Right Bank, were ranked in 1955 and Cheval Blanc was one of two that received the highest rank of Premier Grand Cru Classé (A). Those rankings were redone in 1969, 1986, and 1996 and most recently in 2006 (although that ranking is the subject of an ongoing legal dispute not relevant to Cheval Blanc) and Cheval Blanc has remained a First Growth in every subsequent ranking.
END_OF_DOCUMENT_TOKEN_TO_BE_REPLACED

According to the label, this is 75% Merlot, 15% Cabernet Franc, and 10% Malbec.  It is a biodynamic wine.  Ruby/purple in color if a bit flat.  The nose is nice with cedar, cherries, and a slight char.  Firm tannins.  A bit thin on the body.  Black cherry fruit with low acidity.  Moderate finish.  This is a nice inexpensive Bordeaux for drinking over the next few years.  It the fruit holds out, perhaps even longer.  Better with food.  This would be nice with meatloaf or a burger. 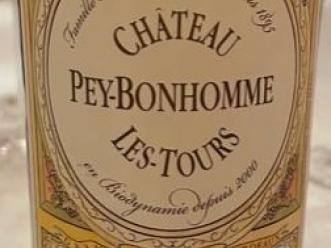 2005 was an excellent vintage, but, especially the right bank Merlot based wines, is now starting to really drink well.  100% Merlot.  Purple in color with ruby swirls, mostly opaque and bright.  The nose is lovely with black cherries, cassis, chocolate and spice.  Light tannins.  Medium bodied.  On the palate, black cherries with underlying funk.  Good finish.  This seems to be about at peak but should drink well for another five to seven years.  It drinks well on its own but will work better at the dinner table with perhaps roasted fowl. 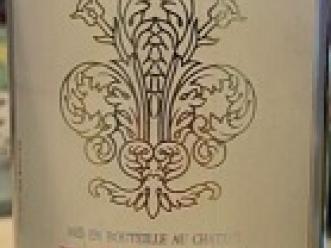