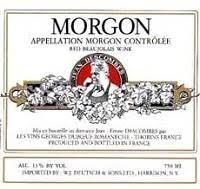 Purple and opaque in color.  The nose has black cherries, and black olives with some black raspberries.  Again, it reminds me of the northern Rhone (not a bad thing).  Very smooth.  Deep and almost impenetrable at this point.  Black raspberries and black cherry fruit.  Firm tannins.  Needs time but lots of potential.

If you are a wine lover, wine connoisseur, wine aficionado or even if you just like to have a couple of glasses on a Friday night, it soon becomes obvious that there are some wines that are held in a higher esteem in the wine world. Sometimes, it is because these wines are very rare. Other times, it’s because the wine has a place in history. Sometimes it’s because the wine is just that good. Here is a list of 75 wines from France that make up that category. A few caveats. I have not tried every wine on this list. Some I have and others I hope to. Many of these wines are rare and hard to find. That doesn’t mean they shouldn’t be on the list. After all, if the opportunity presents itself, go for it.
END_OF_DOCUMENT_TOKEN_TO_BE_REPLACED

Each year at 12:01 AM on the third Thursday of November, millions of bottles of Beaujolais Nouveau begin a journey from a little French village to locales across the globe. Wine stores and cafes enthusiastically greet these shipments with signs and banners proclaiming "Le Beaujolais Nouveau est arrivé!" "The New Beaujolais has arrived!". With this begins the annual celebration of the arrival of the French wine Beaujolais Nouveau, a celebration steeped in tradition, frivolity, grandeur, legend, and of course, fabulous wine.
END_OF_DOCUMENT_TOKEN_TO_BE_REPLACED

Founded in 1980, Boisset Family Estates is a family-owned producer and importer of fine wines with its roots in Burgundy, France. Boisset’s collection of more than twenty historical and unique wineries boast leading positions in the world’s pre-eminent terroirs, including Burgundy, Beaujolais, the Rhône Valley, the South of France, Canada, and California’s Russian River Valley and Napa Valley. Jean-Charles Boisset, President of Boisset Family Estates, has implemented sustainable, organic, and biodynamic farming practices at the family’s vineyards, while simultaneously introducing alternative packaging innovations that reduce a wine’s environmental impact and carbon footprint.
END_OF_DOCUMENT_TOKEN_TO_BE_REPLACED

One of the most famous wine regions in the world is Chateauneuf du Pape. Chateauneuf du Pape covers almost 8,000 acres in the southern Rhone Valley of France. The officially demarcated wine region enjoys a very warm climate, baked by the Mediterranean sun. While both red and white wines are made here, it is the red wine that has made this area famous.
END_OF_DOCUMENT_TOKEN_TO_BE_REPLACED

Château Lynch-Bages has become one of the most celebrated wineries in France. Château Lynch-Bages located in Pauillac on the left bank in the Medoc Château Lynch-Bages is an 1855 classified Fifth Growth. Since 1973 it has been owned by the enigmatic Jean-Michel Cazes and is now run by his son, Jean-Charles. Jean-Michel Cazes assumed the management of his family’s properties including Château Lynch Bages, Les Ormes de Pez, and Villa Bel Air in Bordeaux, Xisto in Portugal and Tapanappa in Australia. Jean-Michel Cazes has been awarded France’s highest honor, La Croix de Chevalier de la Légion d'Honneur , Decanter Magazine’s Man of the Year, and the Institute of Masters in Wine awarded him their Lifetime Achievement Award. Fundamentally, what are the differences between old world and new world wines? Differences between wine regions originate in differences in soils, grades varietals and mainly climate, or rather different combinations of these key factors. There are many different styles of wine around the world, old or new. But I am convinced that old world wines benefit from a long history and experience.
END_OF_DOCUMENT_TOKEN_TO_BE_REPLACED