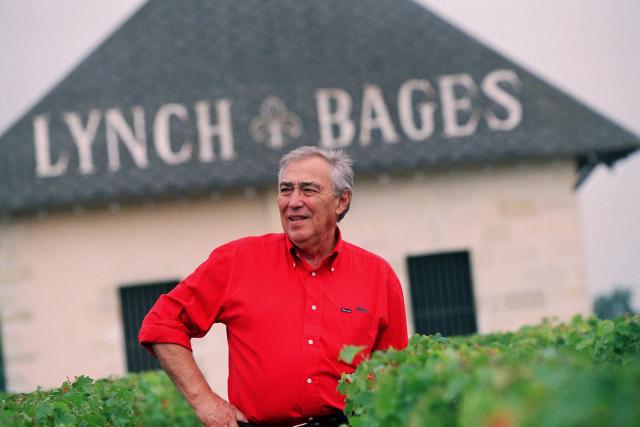 Fundamentally, what are the differences between old world and new world wines?

Differences between wine regions originate in differences in soils, grades varietals and mainly climate, or rather different combinations of these key factors. There are many different styles of wine around the world, old or new. But I am convinced that old world wines benefit from a long history and experience.

Decanter Magazine chose you as “Man of the Year” in 2003. What was that like?

It is a prestigious distinction from a leading wine magazine. I was proud to be the 20th Decanter’s “man of the year.” When I look at the list of the 19 first recipients, I can only see names of people I respect and admire. Some of them have become wine legends and many have been friends of mine for a long time. The occasion was a dinner, in London, at the French Embassy. Good food and excellent wines in a beautiful mansion, and a great crowd of people. A very good memory indeed.

Château Lynch-Bages is still a family-run operation. Are wines made in Pulliac, or anywhere else for that matter, somehow different when the winery is family-run as opposed to being governed by corporate interests?

No, I firmly believe that the identity or the nature of the owner of a particular operation is not what really counts. More important is the passion, dedication and competence of the persons or the team that are responsible for decisions leading to quality in the vineyard and in the wine. There are numerous examples of that. Families come and go, the “terroir” remains.

In 1979 you had the chance to travel around the U.S. doing a series of wine dinners with the first growths of Bordeaux. This was the first time Bordeaux proprietors actively promoted their own wines abroad. Now winemaker dinners are commonplace. Does this reflect on you as an innovator?

I must mention Alexis Lichine, who pioneered the market as soon as the 1950s and eventually became a good friend, and Philippe de Rothschild who promoted his Mouton wines very early in the 60s and 70s. I learned a lot from them. There were a couple of others, but they were not many. It is a fact that I was one of the first “bordelais” producers to travel extensively and promote Bordeaux wines in the USA. My rather good knowledge of the English language and the American culture, coming from my experience at University of Texas in Austin in 1959/1960 was definitely an asset. Let me mention too an individual who is quite a character: Miklos Dora of Santa Barbara, CA, whom I met in 1978 through Philippe Cottin of Mouton-Rothschild. Miki had a thorough knowledge of the U.S. market and of the people in the business and I owe him a lot. He had a high sense of precision and thanks to him we were able to set up programs of high quality that attracted major wine lovers. Today at 98, and in good health, Miki Dora has become a legend, still regularly enjoys a good glass of wine and remains a close friend.

You officially “retired” in 2006, but does one ever actually retire from the wine business?

Yes; if you're lucky enough to trust the people in charge. Which is the case with my son Jean Charles, who took over the day-to-day operation of our wine business four years ago and has been demonstrating his capacity to lead a good technical team and make excellent wines…. And no; because this doesn't mean that I am not interested in what happens in our vineyards or in our cellars. On the contrary, when you put some distance, the contact with the younger generation is easy. I am available for any advice or opinion if needed and we enjoy a confident and active relationship. I also follow closely some of our activities less related to our core business but still important for us, for instance our hotel and Michelin-star restaurant, our brasserie Cafe Lavinal and generally speaking the environment of the Lynch-Bages estate and the village of Bages. Keeps me busy.

You received a degree in Geology with an emphasis in Engineering. How has that helped you in the wine business?

Making great wine needs a lot of passion, but it is also very technical. I found my engineering background useful in the fact that, although I'm not trained in oenology, it allowed me to be able to communicate efficiently with professionals, oenologists or agricultural specialists alike, in order to understand their needs and make informed decisions about vineyard operation or winemaking.

I could do without. It may be useful in some respect, but I believe it oversimplifies the appreciation of particular wines and privileges tasting over drinking, which are two very different exercises. As a result, it pushes forward wines with high concentration and alcohol, which usually show better in a simple tasting, but are not necessarily those who provide the drinker with the higher satisfaction. I do not get real pleasure from a 100-point wine that I cannot, at dinner, swallow more than half a glass! It also has a very questionable effect: because it's so simple, it has become a convenient tool used by individuals or funds to help with their investment decisions. To put it shortly, it makes speculation easier and demand concentrates on high point wines. This proves detrimental to real wine lovers, and has now made some wines financially out of reach for the vast majority of them. As a consequence some winemakers’ are led to boosting by all means average critics ratings, obviously for commercial reasons. I find this very sad.

Alcohol levels are on the rise in the U.S. and we see this trend in the EU and other wine regions. What are your thoughts on the subject?

See above... It is a fact that the quest for the 100-point Grail gets some people to produce highly concentrated and overripe wines. I still believe finesse is not dilution... Fortunately, it seems there is a movement to come back towards more balanced and elegant wines. I am confident that this movement will continue.

Frankly speaking, are Bordeaux First Growths among the greatest wines in the world, and if so, why?

Yes, but this judgment cannot be limited to the five First Growths only. They are the leaders of a battalion of great wines that are produced in Bordeaux. Yes, because these wines exhibit their qualities in an exemplary fashion. They combine tannic structure and finesse, concentration and elegance. On top of that, they are known for their exceptional aging potential, which is based on the perfect mastering of blending the varietals and the terroirs, thanks to a very long experience. To sum it up, they are produced on specific soils, under a very specific climate, using methods which result from a several century-old experience and tradition, under the guidance of competent people who concentrate their efforts towards top quality and spare no effort.

For the average American wine consumer, French wines are still something of a mystery. How do you market French wines to the U.S. palette, now that U.S. consumption levels are significantly on the rise?

I believe that the best promotion results from sharing the joy of wine with people who are genuinely interested in what is concealed in the bottle. So we put a lot of emphasis in meeting our customers, knowing them as much as we can and participating in tastings or events around the world. It is a great satisfaction for us to reveal to those interested what might appear to be hidden behind our labels. We believe it is also important to open our cellars. Many visitors make the effort to come and see us and we want to deliver them complete and reliable information. That is why we make efforts to support our high-quality restaurants and their talented chefs and develop wine education programs, based on our belief that wine is an important part of the culture of fine dining and generally speaking of the art of living.

If you are a wine lover, wine connoisseur, wine aficionado or even if you just like to have a couple of glasses on a Friday night, it soon becomes obvious that there are some wines that are held in a higher esteem in the wine world. Sometimes, it is because these wines are very rare. Other times, it’s because the wine has a place in history. Sometimes it’s because the wine is just that good. Here is a list of 75 wines from France that make up that category. A few caveats. I have not tried every wine on this list. Some I have and others I hope to. Many of these wines are rare and hard to find. That doesn’t mean they shouldn’t be on the list. After all, if the opportunity presents itself, go for it.
END_OF_DOCUMENT_TOKEN_TO_BE_REPLACED

Founded in 1980, Boisset Family Estates is a family-owned producer and importer of fine wines with its roots in Burgundy, France. Boisset’s collection of more than twenty historical and unique wineries boast leading positions in the world’s pre-eminent terroirs, including Burgundy, Beaujolais, the Rhône Valley, the South of France, Canada, and California’s Russian River Valley and Napa Valley. Jean-Charles Boisset, President of Boisset Family Estates, has implemented sustainable, organic, and biodynamic farming practices at the family’s vineyards, while simultaneously introducing alternative packaging innovations that reduce a wine’s environmental impact and carbon footprint.
END_OF_DOCUMENT_TOKEN_TO_BE_REPLACED

There are few people who have thought harder or more comprehensively about where the French wine industry has been and where it is heading than author Andrew Jefford. In his book, The New France , Jefford delves deep into seemingly every angle of importance regarding French wine. The reviews have been uniformly exceptional.
END_OF_DOCUMENT_TOKEN_TO_BE_REPLACED

Along the French border with Germany lies the region of Alsace (all-SAHss). The region’s customs are a combination of both the French and German culture, a result of the political turmoil this region has long experienced. Alsace has changed ownership four times in the past few hundred years. Since World War I, this area has belonged to France. The wines, however, bear as much resemblance to the wines of Germany as they do to the wines of France. To be more precise, the wines of Alsace are a hybrid of the two, yet distinct from either.
END_OF_DOCUMENT_TOKEN_TO_BE_REPLACED

One of the most famous wine regions in the world is Chateauneuf du Pape. Chateauneuf du Pape covers almost 8,000 acres in the southern Rhone Valley of France. The officially demarcated wine region enjoys a very warm climate, baked by the Mediterranean sun. While both red and white wines are made here, it is the red wine that has made this area famous.
END_OF_DOCUMENT_TOKEN_TO_BE_REPLACED