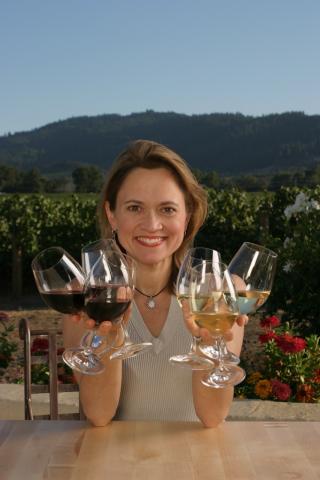 Andrea Robinson one of the country’s leading wine educators, and is one of only 16 women in the world who have been appointed Master Sommelier by the prestigious Court of Master Sommeliers. She was the first woman ever chosen Best Sommelier in the United States by the Sommelier Society of America. In 2007 she was appointed Master Sommelier for Delta Air Lines, for whom she selects all of their in-flight wines as well as develops flight attendant wine training. Her production company JGR Productions produces informative food, wine and travel video content for Delta Air Lines, Borders Books, and broadcast media and she has worked with the Food Channel and PBS. She is the author of eight wine and food books including Andrea Robinson’s Wine Buying Guide for Everyone, and her articles have appeared in publications such as Health, Eating Well, Esquire, Real Simple, Money, and Bon Appétit. She has received a James Beard Award for Broadcast Journalism. Formerly this busy mother of three was the Wine Director at Windows on the World, and was Corporate Director of Beverage Programs for Starwood Hotels.

As a master sommelier and chef, is food and wine pairing becoming over-rated and too trendy in the U.S.? It seems that perhaps the simplicity of food and wine has been elevated to theatrical heights? What do you think?

I wouldn’t say it is over-rated, but over-complicated. I can’t stress enough how world-rocking a great wine and food match can be. But I also can’t stress enough that it need not be over-thought because it is hard to go wrong with most wine and food pairings - except for maybe like a big Napa Cabernet Sauvignon and a Krispy Kreme donut. But you shouldn’t eat too many donuts anyway.

What do you see as the next white and red varieties positioned to capture the American public’s attention?

Assyrtiko, a white wine from Greece; Torrontes, another white from Argentina, and Tempranillo, a red wine from Spain.

What was your first “ah-ha” wine and what about that experience helped shape your love of wine?

It was Lindemans Bin 65 Chardonnay with microwave popcorn. I realized that popcorn goes with any wine out there, and the wine doesn’t have to be expensive to be really, really good. That is something the Europeans know so well.

I see all those arguments. I believe wine ratings can really help consumers if they find a few experts’ palates with which theirs agree. If they just assume that it has to be 90+ points from so-and-so to be any good (even if secretly they don’t like some high scoring wines and do like some less-high-scoring wines) they are enslaved by the scores. I think the Internet is giving voice to new raters and professionals, which will help. I also think a certain self-confidence and empowerment in consumers trusting their own palates are also taking place. And yes, I do think many wineries now try to make a wine to the “Parker” style in hopes of getting a really high score and I think that’s sad. But there are enough winemakers marching to their own drumbeat that diversity will remain with us. There are certainly plenty of Master Sommeliers singing the praises of that movement, which helps a lot.

What prompted you to pursue wine as a career? If not wine, what path would you have likely chosen?

My career is based on a love of food and cooking, and a chance wine tasting course that I took just for fun. There was also the realization that my first career in investment banking was going to get pretty boring, or pretty consuming, or both.

Rising wine alcohol levels in U.S. and foreign wines are an important topic. What are your thoughts on this subject?

I hate it. I am not interested in doing shots with my meal. Plus I’m petite and after 3 kids I can’t handle so much alcohol. Having said that, balance is critical and some higher alcohol wines do accomplish that.

Are experts like yourself critical to the proper education of wine lovers or can the vast majority of people learn as they go with little, in any, help from professionals?

You can go either route and do just fine. Learning from professionals however will get you there faster and help you avoid kissing too many frogs.

What are your “go-to” wines you have in your cellar?

As much bubbly, especially French Champagne, as possible. French red Burgundy when I can afford it, Riesling, but I never let it age long enough, and Spanish wines.

What, in your opinion, are the most underappreciated wine regions in the U.S. and overseas?

New York for Riesling in the U.S. Washington state in general, but that’s changing, as they are getting more attention. In Europe, Rioja and Rueda in Spain, all of Greece in general, and Sardinia in Italy.

Has the advent of social media aided the average wine consumer in being able to find information that is valuable to use? Clearly there is more “noise” than ever about wine. Is this a positive step forward in wine education, or merely more fodder for PR and marketing campaigns?

It’s all of the above but there are plenty of opportunities via social media for direct connection with experts, and by and between like-minded “students” of wine. It’s all good!

There is currently a raging debate as to the validity of what an “influencer” is. Who are the most influential wine people in the United States, and how exactly do you define ‘influential?’ Does an influential mean a person who moves markets, impacts consumers, inspires winemakers, forms policy,...
END_OF_DOCUMENT_TOKEN_TO_BE_REPLACED

People love lists; they can be a great source of education and discussion. But making a list such as this is not an easy process. Who are the most influential wine people in the U.S., and how exactly do you define ‘influential?’ Does influential mean people who move markets, impact consumers, inspire winemakers, and create debate? In a word, yes. These 100 people, from winemakers to law makers, bankers to bloggers, and sommeliers to celebrities are definitely people who influence wine; how it is made, marketed, perceived, sold, shipped, purchased and shared.
END_OF_DOCUMENT_TOKEN_TO_BE_REPLACED

Our 2013 iteration of this list is intended as a source of education and discussion. The making of this list is never an easy process. Who are the most influential wine people in the United States, and how exactly do you define ‘influential?’ Does influential mean people who move markets, impact consumers, inspire winemakers, form policy, and create debate? Yes. Though some decry the consolidation of the wine industry (and that is an issue worth considering) we are not trying to suggest who is “good” or “bad” within America’s wine industry. We merely define the Top 100 people, from winemakers to law makers, bankers to bloggers, and sommeliers to celebrities who influence wine; how it is made, marketed, perceived, sold, shipped, purchased, shared and consumed. As was true in 2012, we sought help to assemble this list people from a diverse group of people and we are grateful for their input. And we chose to release it today, January 29th, as it was on this day in 1919 when the pathetic policy of Prohibition was ratified; the effects of this lunatic legislation still evident in our country’s inability to ship and sell wine across state lines. We honor winemakers, wine drinkers and wine lovers of every conceivable demographic. Use this list, comment on it, share it with everyone, learn from it, and continue your joy of being IntoWine.
END_OF_DOCUMENT_TOKEN_TO_BE_REPLACED

Ah the ubiquitous list. Everywhere you turn these days there is a top 10, the best 50, or some iteration of a who’s who list. So we can’t resist, besides, our Top 100 Most Influential Wine Industry list scored a lot of buzz, created a lot of chatter and even made a few enemies. This list is all about winemakers, those currently making wine here in America – not the great ones who have come before, but folks who make wines you can find now. There are some 7,000 bonded wineries in the U.S., and there’s a lot of forgettable wine being made. And in a world of homogenization of wine styles and a sense that our domestic wine industry is not legitimate without a French or Italian flare, we desire to promote regional flavor profiles of all American wine craftspeople. There are names here you’ll know and recognize, and names you never heard of but everyone on this list is influencing the public, fellow winemakers and the media in large and small ways. Use this list to learn about wines, varieties and regions you may not have considered; comment on it, share it with everyone, but above all continue your joy of being IntoWine.
END_OF_DOCUMENT_TOKEN_TO_BE_REPLACED

Women have played a role throughout wine history, but many gained status through husbands or fathers. Since the 1960s, the number of women making their way into the industry on their own merit has greatly increased. Even without prominent family ties, women have become winemakers, winery owners, grape growers, researchers, writers, managers, sommeliers, educators . . . in fact, experts in all areas of the business.
END_OF_DOCUMENT_TOKEN_TO_BE_REPLACED