The name Burgundy conjures up images of lush pinot noirs and chardonnays with expensive price tags, served to you with a French accent. It’s most wine lovers dream to visit the region and immerse yourself in pate, pinot and pastries.

But the reality is that the Burgundy region, as famous as it is, is a working region, unassuming and harmonious with its surroundings. In short, it’s not Napa. A recent drive from Dijon to Beaune in the Cote D’Or showcased just how dissimilar the area is from its famous American counterpart. My destination was Bouchard Pere & Fils one of Burgundy’s top producers. Being my first time in Burgundy there was certainly gleeful excitement at driving the N75 highway past famed vineyards that race up mountain sides and cover the flatlands. That the area looks so postcard perfect with its cobblestone streets, rustic French architecture and cafes punctuating the place, only adds to its irresistible charm.

Arriving at the venerable winery I was greeted by Isabelle Philippe, the External Relations Manager who has been with Bouchard for 15 years. She graciously took me on a private tour of the wineries extensive cellars, exterior gardens and we ended with a tasting of seven pinot noirs and six chardonnays. Bouchard’s “museum” of old bottles is well known. “We have 3,000 bottles of old Burgundy from the 19th century,” Philippe says. Their oldest bottle dates from 1846 and was tasted just two years ago. They re-cork their older bottles every 20 to 25 years. And don’t think the dust covered bottles are available to taste, they aren’t. But as a visual cue to history, it’s hard not to be giddy about the thought.

The original property itself was under the control of the nobility and the church. But after the French Revolution, when the country turned on its ear, Michel Bouchard seized upon the opportunity to invest in vineyards, purchasing his first in 1791. “When Bouchard began to buy land, the aim was not to be a giant, but to have the best representation of Burgundy,” Philippe told me. “We intervene as less as possible,” she said as it relates to the winemaking process. The surrounding hillsides cause Philippe to comment, “In terms of geology, there is more diversity here than anyplace in the world,” however Burgundy is known specifically for its clay and limestone soils. And since Bouchard uses 20 different premier cru vineyards in addition to their many others, they have nearly the whole of the Cote d’Or locked up in some way. The Château itself is no longer the workhorse facility. That honor has been given to a new winemaking facility, a pedestrian building just outside of Beaune where the real work is done. The Château however, still regal and graceful, beautifully landscaped and rich with history, is an ideal venue to sample wines, which have been made in this region since the 10th Century.

We started with the 2006 pinot noirs first, then moved to the 2006 chardonnays. In speaking about the “lighter” nature of pinot noir, most under 13.5 percent alcohol, compared to the excessive nature of U.S. pinot noirs, Philippe stated, “It’s easier to match clean fresh wines with balanced acidity to food. But if wines are too rich and powerful it fatigues your palette. Most times we begin to harvest early (to avoid overripe fruit) to keep freshness.” This is something California pinot producers could learn from. Like most vineyards in the region, they use a tight one square meter spacing for the vines.

Their largest production of a single wine is their under their Beaune du Chateau label for the pinot and chardonnay. These wines, widely available, are “made to drink young,” Philippe says. The pinot for example is a blend of 17 different premier cru vineyards, all belonging to Bouchard, whereas the chardonnay was harvested from four different vineyards. The result of so many diverse vineyards sites is clearly evident in the wine. The chardonnay picks up the minerality that Burgundy is known for and the pinot is so harmonious with the best of more than a dozen vineyards contributing to its character.

It’s common knowledge that the region’s wines are not cheap. “In Burgundy we cannot produce wines that are inexpensive, therefore we cannot compete with vins de pays,” Philippe says. Their standard offerings, the Bourgogne 2006 chardonnay and pinot noir sell for around $20. But these are not specific vineyards, rather a regional appellation, the fruit pulled from a broad base.  Vins de pays, uninteresting table wine for example, sells easily for around $6. Even in the U.S. a quality pinot cannot be produced for under $20. Therefore, when in Beaune, specifically when at Bouchard, the excellent quality is worth paying for.

Nowhere is that reflected in the wine better than the Beaune Greves Vigne de l’Enfant Jesus 2006. This estate grown pinot noir premier cru has a stunning nose, a velvety texture and is exactly what pinot noir should be, restrained, seductive, plush and the kind of wine that gives you a visceral reaction to it. As with the majority of Bouchard’s wines, there is a reflection of some of the best parts of Burgundy and the chardonnay’s showcase this well, from flinty and mineral components and a balancing of acidity, to the judicious use of malo-lactic fermentation. From the 2006 Pouilly-Fuisse to the high end 2006 Corton Charlemagne, the consistency of Bouchard wines are remarkable. Many Bouchard wines are available in the U.S., but when in France, you can locate them all, and it is well worth it the next time you need a fantastic pinot noir to go with your pate.

France's Burgundy Wine Region: A Primer on the History, Wines, Vineyards & Terroir contains an excellent introduction into the ethereal wine of one of the most famous wine producing regions. No winery is more famous, or produces such legendary wines in Burgundy than Domaine de la Romanée-Conti. Often abbreviated as DRC, the winery makes some of the most exclusive and expensive wines in the world. They are, for those lucky enough to have tried them, the pinnacle of Pinot Noir and Chardonnay.
END_OF_DOCUMENT_TOKEN_TO_BE_REPLACED

About 110 miles southeast of Paris, at the northern tip of the Burgundy wine region France lays Chablis. Chablis is the name of a village that has given its name to a region producing some of the best white wines in the world. The region of Chablis encompasses 19 towns and is about twenty by fifteen kilometers in size. In France, by law, wines are named after the place where they are fashioned and not the grape varietal. The wine producers of Chablis have spent hundreds of years determining which grapes produce the best wines for their soils and the answer: crisp, mineral-driven wines made from the Chardonnay grape.
END_OF_DOCUMENT_TOKEN_TO_BE_REPLACED

France's Burgundy wine region produces some of the world's truly great wines. This is a region completely dedicated to terroir and tradition. Even the grapes planted in Burgundy are restricted to a few traditional varietals, with pinot noir and chardonnay holding pride of place – as they have for many, many centuries. Burgundy's Winemaking History Burgundy's winemaking history dates back at least to ancient Roman times, possibly earlier, although documentation is scanty prior to the Romans' arrival. Catholic monks cultivated vineyards during the Middle Ages, and the ruling Dukes of Burgundy involved themselves in the grape-growing process in an effort to improve the quality (and, no doubt, export value) of Burgundy wines. It was during this period that pinot noir became the red wine grape of choice in Burgundy. Vineyards shifted from Church ownership to individual owners during the Renaissance, and, in the aftermath of the French Revolution some 300 years later, all remaining Church vineyards were privatized. These privately-owned vineyards were divided and re-divided under Napoleonic law, which forced families to split holdings among heirs instead of willing all inheritable property to one descendant. This division of the vineyards led directly to the system used in Burgundy today; hundreds of growers sell their grapes to négociants , or buyers, who use the grapes to make wine.
END_OF_DOCUMENT_TOKEN_TO_BE_REPLACED

Checking on a 2005 Burgundy.  Not ready yet.  Ruby/purple in color.  The nose is nice but primary with cherries and spice.  On the palate, this has cherries, slight tannins and spice.  Pretty monolithic at this stage but it eventually opens with air.  Hold these for now. Gold in color.  A bit deeper, probably saw some new oak.  The nose is dusty with some lemon and spice.  On the palate, this is a very rich wine.  Very good, if to me, un-Chablis-like.  Lemon candy, almost sweet.  Round.  Enough acidity but no more.  Nice finish. 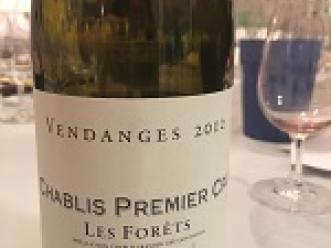