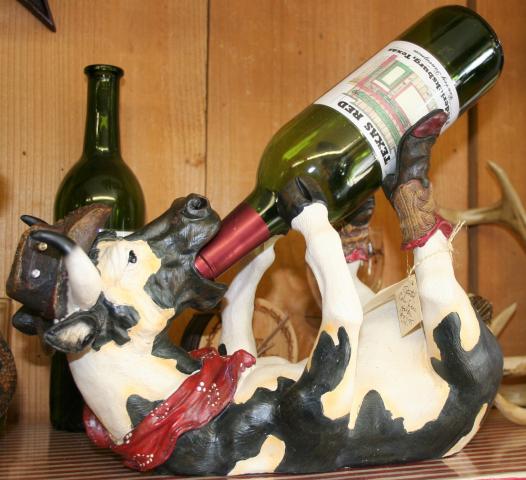 Wine has been made in Texas as far back as the late 1700s when the Spanish planted the underwhelming Mission grape. Today the state is the 5th largest producer of wine in the U.S., which may surprise you; however the caveat for Texas wines is that most of it is consumed by the 25 million dedicated Texans who drink it before the rest of us can get hold of some. “There’s a pent up demand for Texas wines,” admits Grape Creek Vineyard owner Brian Heath. And let’s face facts, Texas and the rest of the U.S. have had little to drink wine-wise except for what California produces, and now, with the help of the slow food movement, and awareness of all things “local,” states want to drink what they make.

There is, to some degree, a built-in audience for wine and many states and wineries are capitalizing on that. Wineries and official wine routes are springing up, like a surprise dust devil in Texas. Route 290 in Fredericksburg, which has nearly a dozen tasting rooms, is fast becoming the defacto wine trail, since it’s an easy drive from San Antonio and Austin. The Hill Country as it is called is becoming clustered with wine tasting rooms and even restaurants like the Fredericksburg-based Cabernet Grill serve only Texas wines, by the glass and by flights. But hold your horses. There are a few things to consider.

By and large Texas wines are improving their quality and getting a better handle on which varieties do best. The downside is the vineyards’ relationship with Mother Nature. Obviously that’s true for farmers everywhere, but Texas has its share of weather which is the most critical factor in the growing season; it’s a focal point for Texas as ripening can become difficult due to wild temperature fluctuations and random hail, rain, and extreme heat. “One of the issues with Burgundian varieties here is getting that herbaceous quality,” says winemaker David Kuhlken of Pedernales Cellars who makes some of the best Merlots, Cabernets and GSMs in the state. On the whole however these traditional varieties don’t excel and a briar-like quality can be present in the red wines.

Tempranillo and Petite Sirah are the up and comers for reds and there are very good quality versions consistent throughout the state. “But only 1 in 3 tasting room customers even know what Tempranillo is,” says Kuhlken who realizes the learning curve for new grape varieties will take a while. White wines are, overall, the better wines represented with more comprehensive with good acids, and proper varietal characteristics of the individual grapes. Chenin Blanc, Pinot Grigio and Viognier are the clear winners while Chardonnay is better left to California. Having said that, the white wines from Perdenales and Grape Creek are excellent. “Acid for the whites is one of the biggest issues here, and though a lot of growers are focused on brix, the acid is fundamental,” says Heath. “We’ve been pleased with the acid balance of the white wines. Most varieties don’t work well as stand alones,” he admits, therefore blending is crucial to make these wines succeed. “We use predominately American oak, but we do use French, both old and new. We believe it adds a softening and complexity to the wine,” Heath adds.

Heath, a sort of poster child for Texas wineries, did what many winemakers do. He originally looked to establish a winery in California, but eventually realized the growth potential of the Lone Star state. “In Texas there’s more of a pioneering spirit; we’d be one of the millions in California.” Texas is still finding its niche and the model has been that most Texas wineries are located in Central Texas, however much of the grape-growing is in West Texas, like the High Plains region. That means a three or four hour drive to visit your fruit. With that kind of distance and the funky weather, it’s not uncommon for wineries to buy grapes from outside the state to make certain they will have product to sell. In Texas 75% of grapes in the bottle must be sourced from within the state, and outside sources include New Mexico and yes, California.

Texas is certainly a force to be reckoned with as eager winemakers believe they can produce excellent quality. Though Texas will never directly compete with California for sheer scale, it is encouraging that wineries are making their own state proud. In Lubbock, McPherson Cellars is a terrific winery and while around Fredericksburg, make certain to visit Grape Creek Vineyard, and Pedernales Cellars. Trust me, you’ll be very pleasantly surprised.

What's an appropriate wine to serve at a Houston Astros themed party? What wine would be a good gift for a hard core Astros fan? The Houston Astros team started its Texas baseball adventure as the Houston Colt .45s, definitely an appropriate name for a team from the Lone Star State. Founded in 1962, the Colt .45s changed their name in 1965 when the team took up residency at the high-tech Houston Astrodome. Highlighting Houston's connection with the space program, the Colt .45s became the Astros. Fortunately, the team did not change its name when it moved again to newly-built Enron Field, now known as Minute Maid Park, in 2000.
END_OF_DOCUMENT_TOKEN_TO_BE_REPLACED

The old adage that ‘ everything is bigger in Texas ’ should be amended to include the state’s will to grow grapes and make premium wines – no matter what. In no other major wine producing American state does the tantalizing exploration of wine’s possibilities continue to embolden and elude the producers of the area.
END_OF_DOCUMENT_TOKEN_TO_BE_REPLACED

What's an appropriate wine to serve at a Texas Rangers themed party? What wine would be a good gift for a hard core Rangers fan? If you've ever met a native Texan, you already know that residents of the Lone Star State love their state, its history, its culture and, especially, its sports teams. Although the Texas Rangers are a transplant to the Lone Star State – the team began its Major League Baseball existence as the expansion Washington Senators team in 1961 – residents of the Dallas, Fort Worth and Arlington metro areas have learned to love their baseball team. Named for the world-famous Texas Ranger Division of law enforcement officers founded by Stephen F. Austin, the Rangers baseball team has transformed itself from losing transplant into a winning franchise.
END_OF_DOCUMENT_TOKEN_TO_BE_REPLACED

What's an appropriate wine to serve at a Dallas Cowboys themed party? What wine would be a good gift for a hard core Cowboys fan? Whether or not you hail from Texas, you probably know the Dallas Cowboys as "America's Team." From coast to coast, you can buy Dallas Cowboys gear at retail stores, thanks to the team's enormous national fan base. Although the Cowboys have their fair share of detractors, no one who follows professional football would dispute the claim that the Cowboys have proven that an expansion franchise can achieve legendary status. The Dallas Cowboys came to life in 1960 as the first modern NFL expansion team, although they were originally called the Dallas Steers. The name was quickly changed to Rangers, then to Cowboys when the new team's owners learned that the name "Rangers" was unexpectedly unavailable. Coach Tom Landry built the Cowboys' program year by year, taking the team to its first NFL championship game in 1966 but losing to the Green Bay Packers. The next year's NFL championship rematch against the Packers quickly became famous as the "Ice Bowl," played in freezing conditions with wind chills plunging below minus 50 degrees Fahrenheit. The Cowboys lost Super Bowl V to the Colts in 1970, but came back the next year to win Super Bowl VI under the leadership of quarterback Roger Staubach.
END_OF_DOCUMENT_TOKEN_TO_BE_REPLACED