This is a Rose wine from Sicily made from 100% Perricone grapes.  Salmon pink/orange in color, clear and bright.  The nose has apples, strawberries and some cherries.  Medium bodied.  On the palate, cherries, red apples with slight strawberries.  A slight orange rind note on the finish.  This is refreshing and should be versatile with food.  Pasta alla Norma should be a classic match.  Drink over the next couple of years.

Last month we explored the wines of Mt. Vesuvius in Campania. This article will explore the wines from Italy’s other famous volcano, Mt. Etna. Mt. Etna is in the eastern portion of Sicily. It is the highest active volcano in Sicily at just under 11,000 feet often capped with snow. It is a beautiful place and mystical setting.
END_OF_DOCUMENT_TOKEN_TO_BE_REPLACED

Sicily: The New Darling of Wine Culture – Part One

This is the first of an investigative series on Sicilian wines. Part Two of this series will be a focus on the young, dominating wine industry of the Etna DOC (Denominazione di Origine Controllata) on east coast of Sicily, on and around Mount Etna. For most people, the Mediterranean peninsula of Italy conjures metaphors and sensations of gastronomic ecstasy and high culture. The foods and wines are like its history, sated with drama and prudence. From its politics to its geography, the nation is connected by its diversities of culture, and no where are differences more frequently and poignantly in play than the southern region of Sicily.
END_OF_DOCUMENT_TOKEN_TO_BE_REPLACED

This article is Part Three in a series on Sicilian foods, wines, and culture. Part One of this series was a focus on Sicily as “The new darling of wine culture.” Part Two of this series was a focus on the young, dominating wine industry of the Etna DOC (Denominazione di Origine Controllata) on east coast of Sicily, on and around Mount Etna. To fully experience the foods and wines of Sicily one might spend some time reflecting on the Mediterranean island’s history, its place on the World Map – at the point of three seas and various trade routes – or its harsh geography, and the fact it has been colonized by various civilizations for millennia who introduced and cultivated unfamiliar foods and traditions.
END_OF_DOCUMENT_TOKEN_TO_BE_REPLACED

Italian wine regions and areas can be classified multiple times over, depending on the area, the climate, the history, the grapes, and through an infinite number of other ways. The following description of 7 Italian regions is meant to provide a basic guide, which will be supplemented in articles to come. The 7 regions consist of Veneto and Piedmont (to the North), Tuscany, Campania, Apulia, and the islands of Sardinia and Sicily (to the South).
END_OF_DOCUMENT_TOKEN_TO_BE_REPLACED

This is 100% Certified Organic Nero Mascalese grapes from Sicily grown in sandy soils in western Sicily.  A really great value.  Garnet in color, mostly clear and bright.  The nose is very nice with cherries, black cherries, slight smoke and slight herbal note (chervil?).  Medium bodied.  On the palate, this has black cherry fruit with underlying char.  Also a bit of pepperiness.  Good acidity.  Long finish.  Somewhat like a mythical blend of Pinot Noir and Zinfandel.  This was a real crowd pleaser among friends I served it to.  Drinking quite well on its own, this would work great with pas 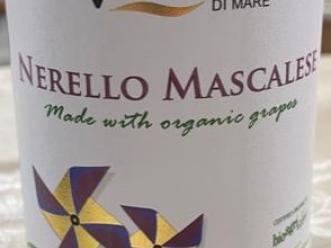