This was a treat.  Lafite was not at the top of their game back in the 60's but still a first growth is cool.  I believe this came from a private collection that was sold to a wine store.  No idea about storage.  The cork was soaked to the rim and the very bottom disintegrated upon opening.  The wine was then decanted for sediment.  Purple in color which was surprising.  The nose took about 30 minutes to blow off all of the bottle stink.  At first it seemed corked but that blew off so clearly it was not (TCA doesn't blow off).  Eventually showing some tobacco, dried fruit, some cassis, and forest floor.  On the palate, this tastes of dried tobacco with some cassis.  No tannins left.  Certainly drinkable and while past prime, I doubt this is a lot worse than how this bottle showed at peak.  i was in third grade when this was released, no doubt drinking Hi-C Fruit Punch.  Fun.

This showed surprisingly well for such a young Lafite.  It was splash decanted for about 20 minutes prior to serving.  Purple in color, opque and bright.  The nose is big with cassis, graphite, cedar and spice.  On the palate, this drinks young but like a pedigreed Bordeaux (which, of course, it is).  Deep.  Plenty of energy.  Spry is perhaps a better word.  Lots of cassis with underlying cedar and spice.  Medium tannins.  Good finish.  This drinks great on its own right now and will work well with a roast or steak.  It probably need another decade or more to get to peak but should drink we 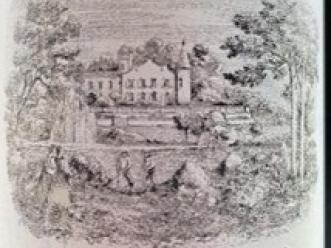 Old bottle are always fun.  Sometimes they work out, other times, not so much.  This bottle had a very low fill.  Below the shoulders and near the top of the label.  The cork was removed using a Durand.  It virtually exploded as it escaped the bottle.  very little integrity.  The bottle was decanted for sediment and pieces of cork, checked right away, but allowed to breathe for a while.  It turned out the wine continued to improve in the decanter for at least 30 minutes as it blew off the bottle stink and gained some strength.  Ruby/brown in color.  The nose has some mushrooms, some fresh m Lots to say about this wine, but first, why it was opened.  My friend Chris is about to retire.  Way back in 1986 or so, Chris was convinced to spend $30 for a 375ml bottle of this wine.  Since that time, he has waited for the right special occasion to open the bottle.  Luckily for me (since I din't meet Chris until around 2010), this bottle is known to maturing at a glacial pace.  He has moved all around the world waiting for the right time and place.  My wife and I had dinner at Chris's home before he leaves town and goes to spend his retirement in Cape Cod.  Chris opened the wine.  What This was not a good vintage and its been a long time.  This bottle was DOA.  Oxidized.  Oh well.  Certainly representative of most bottles at this time. This has a different shaped ullage so saying low-shoulder fill is quite accurate.  The fill was about four inches down from the top of the cork.  The cork was removed and the bottle blew off stink for a bit and then we tried it.  It did get a bit better over the subsequent 20 minutes before dying a quick death.  Garnet in color, mostly clear and a bit flat.  On the nose there is dust, saddle leather, dusty attic and just a hint of dried cranberries.  Medium bodied.  On the palate, there is just a hint of cherries with leather and earth.  A bit tart.  Clipped finish.  There are surely people 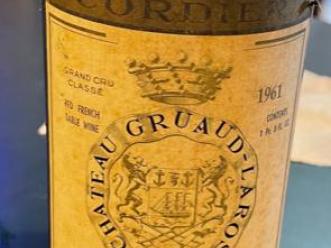