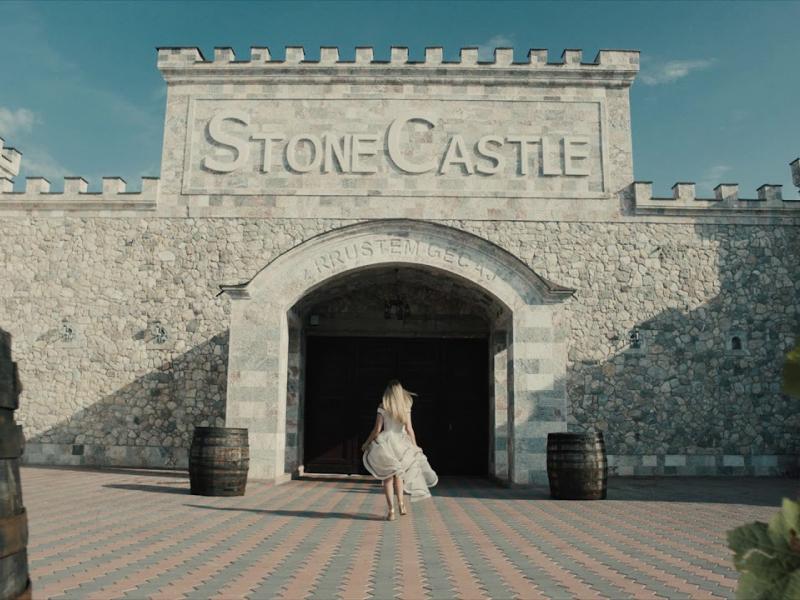 Family-owned Stone Castle Vineyards & Winery is the leading winery in Kosovo’s Rahovec Valley. Although it is a relatively new country, 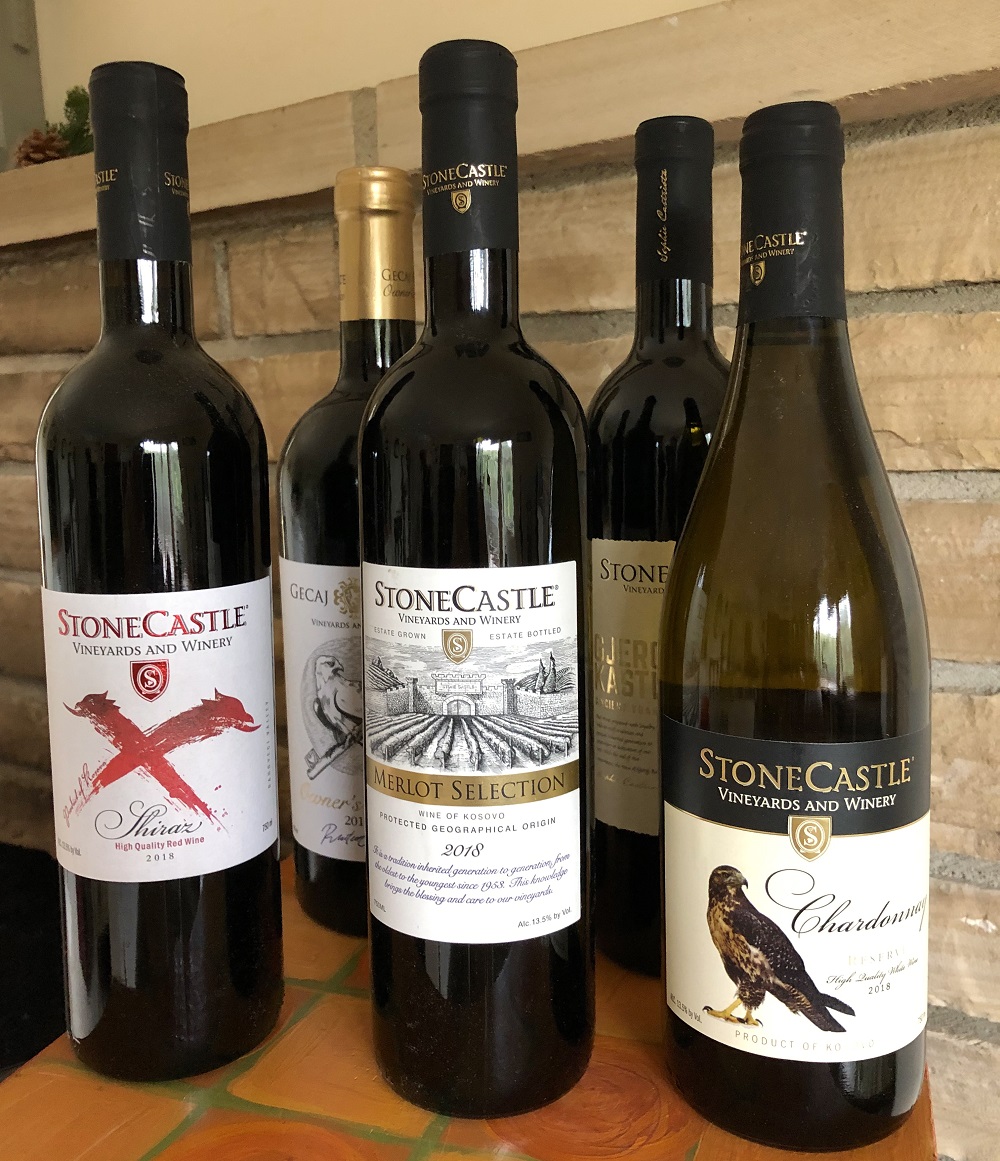 declaring its independence in 2018, Kosovo has a 2,000-year winemaking history. Stone Castle owner Rrustem Gecaj, an Albanian American businessman who left Yugoslavia to escape Communism in the early 1970s, had long dreamed of helping Kosovo rebuild after the ravages of war in the late 1990s. He saw his opportunity when a formerly state-owned winery was privatized in 2006. The winery, which was initially built in 1952, was in Kosovo, then part of Communist Yugoslavia, so state-run enterprises, like this winery, were common. The wines were exported throughout Europe and the winery was one of the cornerstones of the Rahovec economy. But war took its toll.

Mr. Gecaj acquired the facility and vineyards and with the help of his American sons, and set about revitalizing the winery. With the help of international winemaking and vineyard consultants, they now have 1,500 acres of vineyards. Mr. Gecaj worked in restaurants and was a chef in New York City at the beginning of his career, so that had some influence on his interest in wine. But ultimately, in acquiring the winery, he had an overriding interest in helping his country rebuild after the Balkan wars and in building a business that could provide jobs for the people of Kosovo with a sustainable future. With Stone Castle, Mr. Gecaj and his family have established a premium wine identity for this historic region, and they have also brought economic rehabilitation and advancement to this war-torn country. Their wines are in a handful of states in the US currently.

2018 Chardonnay Reserve ($24)
Crisp and clean, this offers notes of guava, white peach, pear blossom with back notes of honeysuckle and butter toffee.

2017 Gecaj Estate Owners Choice ($80)
Soft and supple fruit melds with just the right amount of oak to produce a wine Kosovo should be proud of. Blackberry, black cherry, currant with back notes of violets and vanilla.

2018 Shiraz
Light, fruity with a backbone of tannic structure there are cherry notes, raspberry and graphite. ($16)

2018 Ancient Vranc ($16)
An indigenous grape to the region (also known as vranec) it is genetically related to zinfandel. Aged in Hungarian oak for just nine months this straddles merlot and warm climate syrah and with blackberry, black cherry notes, wild grasses, plum, cedar and earthy notes.

There is currently a raging debate as to the validity of what an “influencer” is. Who are the most influential wine people in the United States, and how exactly do you define ‘influential?’ Does an influential mean a person who moves markets, impacts consumers, inspires winemakers, forms policy,...
END_OF_DOCUMENT_TOKEN_TO_BE_REPLACED

People love lists; they can be a great source of education and discussion. But making a list such as this is not an easy process. Who are the most influential wine people in the U.S., and how exactly do you define ‘influential?’ Does influential mean people who move markets, impact consumers, inspire winemakers, and create debate? In a word, yes. These 100 people, from winemakers to law makers, bankers to bloggers, and sommeliers to celebrities are definitely people who influence wine; how it is made, marketed, perceived, sold, shipped, purchased and shared.
END_OF_DOCUMENT_TOKEN_TO_BE_REPLACED

Our 2013 iteration of this list is intended as a source of education and discussion. The making of this list is never an easy process. Who are the most influential wine people in the United States, and how exactly do you define ‘influential?’ Does influential mean people who move markets, impact consumers, inspire winemakers, form policy, and create debate? Yes. Though some decry the consolidation of the wine industry (and that is an issue worth considering) we are not trying to suggest who is “good” or “bad” within America’s wine industry. We merely define the Top 100 people, from winemakers to law makers, bankers to bloggers, and sommeliers to celebrities who influence wine; how it is made, marketed, perceived, sold, shipped, purchased, shared and consumed. As was true in 2012, we sought help to assemble this list people from a diverse group of people and we are grateful for their input. And we chose to release it today, January 29th, as it was on this day in 1919 when the pathetic policy of Prohibition was ratified; the effects of this lunatic legislation still evident in our country’s inability to ship and sell wine across state lines. We honor winemakers, wine drinkers and wine lovers of every conceivable demographic. Use this list, comment on it, share it with everyone, learn from it, and continue your joy of being IntoWine.
END_OF_DOCUMENT_TOKEN_TO_BE_REPLACED

Ah the ubiquitous list. Everywhere you turn these days there is a top 10, the best 50, or some iteration of a who’s who list. So we can’t resist, besides, our Top 100 Most Influential Wine Industry list scored a lot of buzz, created a lot of chatter and even made a few enemies. This list is all about winemakers, those currently making wine here in America – not the great ones who have come before, but folks who make wines you can find now. There are some 7,000 bonded wineries in the U.S., and there’s a lot of forgettable wine being made. And in a world of homogenization of wine styles and a sense that our domestic wine industry is not legitimate without a French or Italian flare, we desire to promote regional flavor profiles of all American wine craftspeople. There are names here you’ll know and recognize, and names you never heard of but everyone on this list is influencing the public, fellow winemakers and the media in large and small ways. Use this list to learn about wines, varieties and regions you may not have considered; comment on it, share it with everyone, but above all continue your joy of being IntoWine.
END_OF_DOCUMENT_TOKEN_TO_BE_REPLACED

BEST OFF-THE-BEATEN-PATH NAPA TASTING ROOMS After having visited numerous renowned wineries, many of us are looking for the hidden gems within the Napa Valley. Good wines are certainly valued, but the entire experience a winery provides leaves guests wanting to return and telling their friends and family to visit. Each winery listed in this article has some special draw, whether it’s art, architecture, ambiance, gardens or compelling history.
END_OF_DOCUMENT_TOKEN_TO_BE_REPLACED