The Hamlet of Wine - In the heart of the beaujolais crus is a wine experience in the Disney tradition. In the small village of Romanèche-Thorins, next to his corporate headquarters, Georges Dubœuf has created Le Hameau Du Vin or The Hamlet of Wine. Through the use of expert displays, sophisticated computer technology, audio visual presentations, an animated electronic program, and a wine tasting, the 90 minute self-guided tour takes you on a journey of discovery through the history and culture of wine.

The spark of imagination that created this experience was touched off after a visit to Disney World in Orlando, Florida with Dubœuf's friend, chief Paul Bocuse. Dubœuf was intrigued by the Disney magic. He was most impressed by their ability to simultaneously educate and entertain large numbers of people at all levels. He decided to apply the principles he saw in action there, to the world of wine. After years of planning, the idea was made reality in June of 1993.

The Hamlet of Wine is presented in a complex of buildings covering over 30,000 square feet. As it is located across from the Romanèche-Thorins train station, the beautiful and expansive entrance hall and ticket area is modeled after the Gare de Lyon in Paris. From here, the journey begins by exploring the importance of transportation in the history and spread of wine. A fresco recalling 3,500 years of civilization depicts the history of the transport of wine from ancient times to the era of the railways. In the center of the room, is a half-section model of a Roman boat revealing the stowage of wine amphoras.

The next stop on the journey is into a beautiful and fascinating museum. Georges Dubœuf has put on display some of his extensive personal collection of wine artifacts and tools. Included in this collection is an impressive eighteenth century screw press, a Bacchus in bronze, and an eighteenth century tapestry. 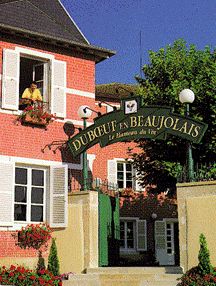 Other rooms give the viewer a glimpse into the "monastic silence" of a barrel aging room. Over a thousand barrels are undergoing maturation inside the museum. As the journey continues we can learn about the different vine and soil types and how each affect the style and character of the wine.

The four seasons of the vine - the wine-maker's year - is described in a wonderful electronic theatre. Animated figures explain and demonstrate the various different tasks undertaken in the vineyard throughout the year. The show ends with the celebrations of the Beaujolais Nouveau in a local village. After the show, there is an interactive relief model of the region to better give you an overview of the various appellations and their respective wines. Slide and video shows also portray the wines and the process of making them.

A new exhibit is the Bistriot of Beuajolais. In the airy loft above the barrel cellar, is a replica of an old bistriot. Famous people who helped in the development and destiny of Beaujolais are given shape and honored.

The next section is devoted to packaging. Our journey here shows us various types of packaging. We learn about barrels and bottles and how they are made. A interesting display of the cork, takes us from the tree to the finished product. Finally, the production and art of the capsule is shown.

At this point, we finally get to taste the final result of all the effort that we have seen and have had described to us, up to this point. In a magnificent hall, sommeliers offer a comparison wine tasting to help us get the most of this experience. (This hall is also available for rental to groups!)

The end of the journey leaves us at a well appointed wine and gift shop. A well-stocked selection of wines are available for purchase from all of the appellations of Beaujolais. You will also find here what is probably the best selection of wine related souvenirs, posters and books in the region.

Georges Duboeuf has been called the King of Beaujolais. This is a title of appreciation as much as it is for achievement. He is, in fact, the region's largest producer, controlling more than 10 percent of the total production. But he is also the relentless promoter of Beaujolais. It would not be inaccurate to state that he has almost singlehandedly made Beaujolais Nouveau a worldwide phenomenon.

The Dubœuf family has lived in the Mâconnais (on the northern border of Beaujolais) since the the 15th century and has been involved in the wine business for over 300 years. Although Georges Dubœuf originally went to Paris to study physical education, he returned home in 1953 and began selling wine to restaurants and became a contract bottler. In 1957 he formed a group of 45 growers called the Beaujolais Casket. The venture was not to be. Three years later he branched out on his own and in 1964 formed his own négociant and bottling firm based in Romanèche-Thorins. Today, his son Franck works with him and is intimately involved in the business.

His firm offers the most wines of any in Beaujolais, at the best prices, and the most consistent style. He works with 20 cooperatives and over 400 growers. Of an annual production of 20 million bottles, over 4 million of those bottles are Beaujolais Nouveau. In fact, the Dubœuf label appears on more than 15 percent of the bottles of Beaujolais sold anywhere.

Each year at 12:01 AM on the third Thursday of November, millions of bottles of Beaujolais Nouveau begin a journey from a little French village to locales across the globe. Wine stores and cafes enthusiastically greet these shipments with signs and banners proclaiming "Le Beaujolais Nouveau est arrivé!" "The New Beaujolais has arrived!". With this begins the annual celebration of the arrival of the French wine Beaujolais Nouveau, a celebration steeped in tradition, frivolity, grandeur, legend, and of course, fabulous wine.
END_OF_DOCUMENT_TOKEN_TO_BE_REPLACED

Most Beaujolais is made and sold by large wine producers or négociants. The leading name and by far the largest of...
END_OF_DOCUMENT_TOKEN_TO_BE_REPLACED

If you are a wine lover, wine connoisseur, wine aficionado or even if you just like to have a couple of glasses on a Friday night, it soon becomes obvious that there are some wines that are held in a higher esteem in the wine world. Sometimes, it is because these wines are very rare. Other times, it’s because the wine has a place in history. Sometimes it’s because the wine is just that good. Here is a list of 75 wines from France that make up that category. A few caveats. I have not tried every wine on this list. Some I have and others I hope to. Many of these wines are rare and hard to find. That doesn’t mean they shouldn’t be on the list. After all, if the opportunity presents itself, go for it.
END_OF_DOCUMENT_TOKEN_TO_BE_REPLACED

As Caesar's army crossed the Alps and into Gaul in the 1st century B.C., they built temples, aqueducts, amphitheatres and roads. Along those roads, Rome's army planted the vine. There is still evidence today in Brouilly and Morgon of those Roman vineyards. After Rome left, the area was invaded by the Barbarians and then the Arabs who also tended the vines and enjoyed the fruits thereof. Founded in the 10th century by the powerful nobility that created the principality, the town of Beaujeu in the western hills of Beaujolais, gives the region its name. It was ruled by the Dukes of Beaujeu until it was ceded to the Bourbonnais in 1400.
END_OF_DOCUMENT_TOKEN_TO_BE_REPLACED

Wines of Burgundy's Beaujolais Wine Region: Quality You Might Not Expect

This is Part One of a Two Part Series on Beaujolais Beaujolais is one of the most misunderstood wines in all of France. Most people know Beaujolais Nouveau as the “grape drink” masquerading as wine that is released every November to much fanfare. There is another side as well. Beaujolais can be a complex wine capable of improving in a cellar and even the best producers can be purchased for reasonable pricing. Beaujolais is a wine that every wine lover should get to know.
END_OF_DOCUMENT_TOKEN_TO_BE_REPLACED