It’s French, so that makes us seem sophisticated. Just kidding. I’m a pediatric cardiologist and my wife is a cardiac intensive care nurse. Voilà: Good Heart. Or in French, Bon Coeur. We explained to the TTB, who had to approve the label, that we weren’t claiming that wine is good for your heart; we were using it to say “good-hearted.” But for the record - it is good for you. Just not too much at once. 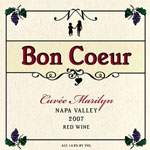 How did your foray into winemaking come about?

It all started in my garage. I like to tell everyone I’m a garagiste, like those artisan Bordeaux winemakers that Robert Parker made famous. Technically it was in my basement, but basementiste doesn’t have quite the same ring to it. I was drinking ten dollar Cabs with my pasta every night until my wife and I had an epiphany wine, a really good Napa Valley Cabernet. So I decided to make a wine like that. What I didn’t realize was how much was involved in making a wine of that caliber, and how important the right tools and ingredients were. I found out the hard way that I could make a pretty nice Go-Kart in my garage in Erie, Pennsylvania, but not a Rolls-Royce. So we’ve moved up to making wine in a state of the art facility in Napa instead of my basement.

Philosophy? Hmm, I guess I need to say something that sounds profound. Like, does wine have an essence, or does wine have a taste if no one drinks it? In simple terms, I know what I like to drink, so that’s what I’m going to make, and I hope you like it, too. And I hope it turns out great. Because 90% of winemaking is talent and the other half is luck, to paraphrase Yogi Berra. So don’t waste your time trying to make wine with anything but the best fruit. And it’s a rare wine that isn’t improved by blending. Besides, blending sessions are great fun, and everyone is really happy at the end.

What are your long-term goals for the brand?

To stay small and focused, putting our limited resources into the wine itself rather than expensive marketing. We make wine that we want to drink, and want to share it with our friends and fans. We’d like Bon Coeur to be known as something special but affordable for those with less money than Warren Buffet, something from a family-like, big-hearted place.

Why the focus on Pinot Noir and Cabernet Sauvignon?

Those are the wines we love. Especially Cabernet. Our friends are split 50-50 Cab vs. Pinot lovers. What I love about them is….well, remember that scene from Sideways, where Miles waxes poetic about why he loves Pinot, it’s so fickle and thin-skinned, etc., etc., but when you get it right, it’s so beautiful it’s haunting – or something like that? Anyway, it made you want to go out and get your own script writer so you could talk like that, but I could relate to that. The Cabernet Sauvignon I think of more like the big brute offensive lineman who can’t put two words together but then gets up and sings an aria like Pavarotti. Pinot Noir is more like the shy little plain- Jane in the back row afraid of her own shadow who finally opens her mouth on the last day of school and sings like Celine Dion.

When it comes to winemaking, what's one thing you know now that you wish you had known before you started?

That it’s really hard to spell “Coeur.” I’m getting pretty good at it, but it’s hard trying to get people to spell the website correctly.

A hot topic in wine circles is the "Parkerization" of wines. Some people claim his 100 point scoring system has been an enabling factor for consumers as they navigate the endless array of brands from which they can choose. Others claim his influence has negatively impacted wine quality as producers are increasingly crafting their wines to earn a high score from Parker at the expense of making the best wine they can with the fruit and resources they have available. Given this, what are your thoughts on Parker and the 100 point scoring system?

I think he has an incredible talent, so I’m an admirer, although my own preferences don’t always correlate with his scores. In my office I have a framed portrait with confetti for hair, yarn for eyebrows and braids, glued to a wrinkled piece of red paper. My daughter made it in first grade. I paid $150 dollars for it, in large part because I was under a lot of pressure at the school fund-raiser. To me it’s beautiful, and has value to me that a great work of art does not, but it will never be mistaken for Picasso. Its eyes, ears, and mouth are in the right place, for one thing. I don’t care much for Picasso, but I accept that he is great – objectively great – because lots of people with deep understanding of art have said so. I think Parker has a deep understanding of wine, and smells, feels, and tastes things in a wine that I cannot, and as far as I can tell, differentiates objective quality from his own preferences. But I might like something else better, even with a lower score. Fixating on scores keeps some people with limited knowledge from drinking really good wine. And that’s a shame. But yes, when I am at a complete loss at the wine store, I use the numbers if I trust the source. It’s all I have to go on, and statistically better than picking by the nicest label.

Lastly, where can your wines be purchased?

Join the mailing list: www.boncoeurcellars.com. Or if you can’t remember how to spell Bon Coeur, www.freemanfamilywines.com also works. We’re small and friendly; you can call me at the office if you don’t like dealing with the internet, 814-455-2252. Just tell them at the front desk that you’re not calling about a heart murmur, chest pain, or palpitation, and I’ll get back to you and get you on the list so an order can be shipped out, as long as we can ship to your state.

BEST OFF-THE-BEATEN-PATH NAPA TASTING ROOMS After having visited numerous renowned wineries, many of us are looking for the hidden gems within the Napa Valley. Good wines are certainly valued, but the entire experience a winery provides leaves guests wanting to return and telling their friends and family to visit. Each winery listed in this article has some special draw, whether it’s art, architecture, ambiance, gardens or compelling history.
END_OF_DOCUMENT_TOKEN_TO_BE_REPLACED

In my last article, I listed the Top 75 French Wines to Try Before You Quit Drinking . In this article I look at the “non-dump bucket” list for wines from California. This proved to be a different task. First, very few wineries have a long track record of making great wine. Secondly, while California is diverse, it does not have the diversity of climates and terroir and grape varietals of France. Still, it does produce some of the best wines in the world and any wine lover should make it a point to try as many of them as they can. Here is my list: 1. Shafer Hillside Select Cabernet Sauvignon – It’s hard to pick the first wine. This one is a great wine in every vintage and has been for a long time. Expensive but still possible to afford and made in large enough quantities to be found in grocery stores. Every lover of Cabernet should try this once.
END_OF_DOCUMENT_TOKEN_TO_BE_REPLACED

The top Cabernet Sauvignon tasted and reviewed by Loren Sonkin in 2019.
END_OF_DOCUMENT_TOKEN_TO_BE_REPLACED

This might be the most interesting back story of any wine ever made: An ex-CIA spy (excuse me... "Case Agent") with a Classics/Latin background becomes a winemaker. This should be the basis for Harrison Ford's next movie but it's actually the real-life story of Richard Hart, founder of Ricardus Corculum. We recently caught up with Richard to chat about his wine venture.
END_OF_DOCUMENT_TOKEN_TO_BE_REPLACED

CHEFS AND SOMMELIERS REVEAL THEIR FAVORITE PAIRINGS Enthusiasm radiates from their lips, as some of the most innovative chefs and sommeliers in the Napa Valley describe their most smashing wine/food pairings, whether recently concocted, or so reliable that they have become a permanent fixture on their tasting menus. Seasoned restaurant professionals not only uncover their wonderful wine and food combinations, but also explain a bit of the process behind their achievements.
END_OF_DOCUMENT_TOKEN_TO_BE_REPLACED