IntoWine.com asked a panel of wine experts for their recommendation for the best Bordeaux Red (for the money):

As Bordeaux classified growths have all hit stratospheric price levels in recent vintages, this becomes more and more of an impossible quest for those of us who still follow the Bordeaux scene—albeit with a lot less of our own money than we used to. The average price of the nearly 10 dozen Bordeaux poured at this year’s Union des Grands Cru Bordeaux event was north of $75—more than most Americans would ever pay for a bottle of wine. I’ve tasted through a great many of the highly touted 2009 and 2010 Bordeaux, and can only really recommend a handful of very relative bargains. 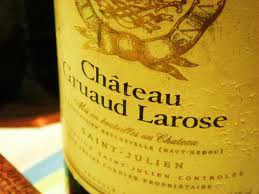 The best price-to-quality performer among the classed growths in 2010 is second growth Château Gruaud Larose, whose delicious offering I rated 94.5 points. Its average U.S. price currently is “only” $97. My very top value pick from the vintage, and one that I grabbed a case of, is Graves-based Château de Chantegrive ($23). Other solid choices for QPR in 2010 are Pomerol’s Château La Pointe ($55); St. Émilion’s Château Grand Mayne ($53) and Château Berliquet ($43). - Richard Jennings, IntoWine.com Featured Contributor and the Founder RJonWine.com

There are a lot of great wines being made in Bordeaux.  Some can cost over $1,000 for a bottle.  That bottle, in addition to the cost, should be cellared for ten to thirty years to justify the cost of the wine.  There are, however, hundreds, if not thousands of other Bordeaux wines available at every price point and in a multitude of styles.  It is pretty easy to name the famous wines, be it the classified growths or some of the right bank stars.  I am going to go another direction, however, and name a wine that has been on a roll in the last ten years producing very good wine at reasonable pricing.  That wine is

Chateau de Fonbel.  This is a mostly Merlot blend from St. Emillion.  The owners are the same owners as Chateau Ausone whose wines can cost $1,000 a bottle.  Fonbel’s wines cost between $20 and $40 depending on vintage.  They are soft and supple and drink well on release, but improve in the cellar for ten years.  In better vintages such as 2005, this wine should last fifteen years or more. - Loren Sonkin is an IntoWine.com Featured Contributor and the Founder/Winemaker at Sonkin Cellars

Bordeaux has its reputation for a reason. It is a powerhouse of big brands and wealthy chateau owners who have vaults of money with which they are able to make some of the world’s greatest wines – and you too pay for it. Right, so, how do ‘we’ get our hands on some real good Red Bordeaux without having to dip into the kids’ college fund? Look no further than the 2005 Lalande-Borie from St-Julien. This is an intense, full-bodied, deeply structured wine featuring bushels of blackberry, currant, baking spices and cedar – much like the best Bordeaux red wines – for under $30. This chateau is owned and operated by the Borie family, who also happen to own Ducru-Beaucaillou and Grand-Puy-Lacoste, and the care that goes into this wine shows. Though this wine typically ages a little faster than some of its neighbors and cousins, the 2005 is quite delicious now and can be enjoyed over the next couple of years. – Ben Spencer is a diploma student with the Wine & Spirit Education Trust and an IntoWine Featured Writer.

No wines receive more hype than those grown in Bordeaux.  Year after year wealthy folks from all over the world purchase wines before they are even released; often paying huge sums of money that has turned good old fermented grape juice into a major commodity. The fact of the matter is that Bordeaux produces a staggering 800-900 million bottles of wine each year that don’t get 95 point scores from Parker or the Wine Spectator, but are often incredibly priced and are meant to be consumed on a day to day basis. The Chateau Sainte-Marie Bordeaux Supérieur is one of those wines; a joy to drink and moderately priced.  This small family-owned estate is located in the Entre Deux Mers region in Bordeaux and makes this blend with Merlot, Cabernet Sauvignon, and Cabernet Franc.  Classic flavors of dark fruit and Cassis are accompanied with just a touch of spice and soft, supple tannins; an everyday wine without pretense. - Joel Bleskacek, Proprietor, Ruby Wine, a boutique wine shop in San Francisco’s Potrero Hill district

One to certainly look for is Chateau Petrus-Gaia.  Yes, I know the name itself sounds expensive but every vintage I’ve had of this has always been a perfect expression of the Right Bank and the year it came from.  The wine is neither Petrus nor Gaja (of Italian Barbaresco fame), rather a small producer who makes fabulous wine.  Typically a blend very close to 65% Merlot and 35% Cab Franc, the wine pleases you with gentle pipe tobacco, violet, and cherry aromas.  The palate offers fleshy black cherry fruit, forest floor nuances, and a refined, focused finish.  Of recent years I’d personally seek out the ’04 and ’06 but every year seems to be something special.  Another wine to seek out would be Stephane Derenoncourt’s Domaine de l’A in Cotes de Castillon which is just east of St. Emilion.  His own personal property, Stephane simply gets more out of his vines than anyone else in the region.  (By the way, Stephane also consults for the aforementioned Petrus-Gaia.)  You should look for his ’07, just to see what he is capable of in what’s considered a poor vintage. - Tony Connell, Personal Wine Consultant for Montesquieu Wines

If you are a wine lover, wine connoisseur, wine aficionado or even if you just like to have a couple of glasses on a Friday night, it soon becomes obvious that there are some wines that are held in a higher esteem in the wine world. Sometimes, it is because these wines are very rare. Other times, it’s because the wine has a place in history. Sometimes it’s because the wine is just that good. Here is a list of 75 wines from France that make up that category. A few caveats. I have not tried every wine on this list. Some I have and others I hope to. Many of these wines are rare and hard to find. That doesn’t mean they shouldn’t be on the list. After all, if the opportunity presents itself, go for it.
END_OF_DOCUMENT_TOKEN_TO_BE_REPLACED

Bordeaux is arguably the greatest wine region in the world. Great cellars around the world are filled with wines from the different chateaus of the region. America’s first wine connoisseur, Thomas Jefferson, not only drank wines from here, but made it a point to visit the region and see for himself what made these wines so great.
END_OF_DOCUMENT_TOKEN_TO_BE_REPLACED

Well-aged wine. The very thought of it stirs the spirit and whets the tongue. Older wine takes on a special character in our minds – not only has it been preserved over time, often lovingly tended by a patient caretaker, but it is a vestige of an era long past. It bears memories of the time when it was produced, the time when it was purchased, and all the time since when you’ve been waiting to enjoy it. There’s simply something special about old wine that captures our fancy in a way that new wine doesn’t.
END_OF_DOCUMENT_TOKEN_TO_BE_REPLACED

The 57 appellations of Bordeaux are not classified in a single official ranking. But the Médoc, Sauternes and Barsac, Graves, and Saint-Emilion districts do have their own official internal classification systems. Pomerol, one of Bordeaux's greatest assets, was not included in the 1855 Classification, and remains unclassified to this day. However, Château Pétrus is often included with the First Growths (Premiers Crus) of the 1855 Classification. The Classification of 1855 Much like our World's Fair today, Napoléon III's 1855 Expositon Universelle de Paris was a chance for France to display its very best for the world to see. The Gironde Chamber of Commerce requested that a classification system be devised to accompany their display of the fine wines of Bordeaux. The Bordeaux Wine Brokers' Union went to work on the project and came up with what we now refer to as the Classification of 1855.
END_OF_DOCUMENT_TOKEN_TO_BE_REPLACED

Bordeaux, the world's most famous wine region and France's largest by AOC volume sold [i] , produces many of the best-known wines on Earth. With 60 appellations and over 8,600 growers, Bordeaux exports wines to over 150 countries [ii] . Winemakers around the world strive to emulate the Bordeaux style, carefully blending red wine grapes to produce a wine that reflects the best influences of its terroir.
END_OF_DOCUMENT_TOKEN_TO_BE_REPLACED