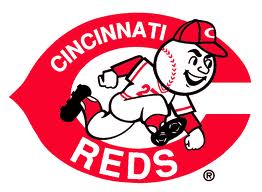 What's an appropriate wine to serve at a Cincinnati Reds themed party? What wine would be a good gift for a hard core Reds fan?

The Reds have won five World Championships and nine National League Championships.  The team won its first World Series in 1919 against the Chicago White Sox; this series became known as the infamous "Black Sox" scandal after several White Sox players were found to have fixed the World Series games.  The Reds went bankrupt in 1931 and were purchased by Powel Crosley, who embarked on a rebuilding and marketing program that turned the team's fortunes around.  The Reds won their second World Championship in 1940.  After a slump of several years, the Reds again began to post winning records in the late 1950s and the 1960s, thanks to the efforts of Frank Robinson, Bob Purkey and many other talented players, but the team failed to win any championships until Sparky Anderson became the Reds' manager.   Under Anderson's leadership, the Reds transformed themselves into the "Big Red Machine," using the talents of Pete Rose, Johnny Bench, Dave Concepción, Joe Morgan, Tony Perez, Ken Griffey, George Foster and the rest of the roster.  The Reds won back-to-back World Series in 1975 and 1976.  A series of trades broke up the Big Red Machine, and the team found itself unable to reach the playoffs for several seasons.  It was not until 1990, under Lou Piniella's leadership and with the "Nasty Boys" pitchers defending the mound, that the Reds won their division and went all the way to the World Series, winning their fifth World Championship in four games.

The final years of the 20th century and the first decade of the 21st have been frustrating for Reds fans, as the team has finished in first place only three times, most lately in 2010.  Injuries plagued the team in 2011, but the 2012 season got off to a strong start, reviving Reds fans' hopes for a winning year.

Which wines would you pour for a Cincinnati Reds fan?  It's tempting to take the easy path and go with, well, a red wine.  The Reds are so deeply tied to Ohio sports history, however, that offering your favorite Reds fan an Ohio wine from the Cincinnati area could be a better option, since Ohio's association with wine dates back to pre-Red Stockings days.  Nicholas Longworth planted Catawba grapes in the Ohio River Valley in 1820, and his vines prospered.  By the beginning of the Civil War, Ohio was producing more wine than any other state in the U. S.   The Civil War and a variety of agricultural diseases nearly killed off Ohio's wine industry, and Prohibition further hampered grape farmers.  In the 1960s, some French-American hybrids were planted in the Lake Erie Island and Ohio River Valley regions, and the state's wine industry began to recover.  Ohio now boasts over 45 wineries, an active Wine Producers Association, five AVAs and several wine trails.

Henke Winery is a Cincinnati urban winery with something for everyone.  At Henke Winery, you'll find a wine shop, restaurant, art gallery, music performances and annual events to enjoy, including annual home vintner and cork sculpture competitions.  Henke Winery's 2011 Cellar Blush won Best of Show Blush/Rosé in the 2012 Ohio Wine Competition, and their Vendange A Trois 2010, Vin de Rouge 2011 and Chardonnay 2010 each won gold in the same competition.  You'll pay about $12 for a bottle of Cellar Blush, $16.50 for a bottle of Chardonnay or Vin de Rouge and $22.50 for a bottle of Vendange A Trois.

Meier's Wine Cellars got its start in the 1890s, first as a purveyor of grape juice, later as a producer of sparkling and still wines.  The grape juice business kept Meier's afloat during Prohibition, and today Meier's Wine Cellars continues to produce a wide array of still, sparkling, fortified and dessert wines as well as several types of sparkling grape juice.   Meier's 44 Cream Sherry won gold at the 2011 Ohio Wine Competition.  Expect to pay about $36 for a bottle of 44 Cream Sherry and $20 for a bottle of Ruby Red Port.

Vinoklet Winery and Restaurant is located in Cincinnati, just minutes away from both I-74 and I-75.  Vinoklet offers tours, tastings, bocce ball, "Cigars and Guitars" music events and, of course, plenty of dining choices in their restaurant.  Weekend Grill meals are especially popular; you grill your choice of meat and add side dishes from the buffet.  (Reservations are recommended.)  Vinoklet Winery's Brother Joe, made from cabernet sauvignon grapes, won gold at the 2011 Ohio Wine Competition and the 2011 Ohio State University Wine Competition.  Vinoklet's La Dolce Vita, a sweet red, won gold at the 2011 Finger Lakes International Wine Competition.  Vinoklet's award-winning Traminette Master Reserve sells for $20 per bottle, as does Brother Joe, while a bottle of La Dolce Vita will cost about $15.

Burnet Ridge Winery's history began when owner and winemaker Chip Emmerich decided to make artisan wine in his North College Hill garage for himself and a few other people.  Emmerich eventually created a business partnership with a friend and opened Burnet Ridge as a commercial winery.  Burnet Ridge 2010 Lake Erie Pinot Gris won Overall Best of Show at the 2011 Ohio Wine Competition.  You can purchase a bottle of 2011 Lake Erie Pinot Gris (the 2010 is no longer available from the winery) for about $26.  Burnet Ridge 2009 Purple Trillium, a Bordeaux-style blend, and 2009 Lake Erie Cabernet Franc are available at the same price.

People love lists; they can be a great source of education and discussion. But making a list such as this is not an easy process. Who are the most influential wine people in the U.S., and how exactly do you define ‘influential?’ Does influential mean people who move markets, impact consumers, inspire winemakers, and create debate? In a word, yes. These 100 people, from winemakers to law makers, bankers to bloggers, and sommeliers to celebrities are definitely people who influence wine; how it is made, marketed, perceived, sold, shipped, purchased and shared.
END_OF_DOCUMENT_TOKEN_TO_BE_REPLACED

There is currently a raging debate as to the validity of what an “influencer” is. Who are the most influential wine people in the United States, and how exactly do you define ‘influential?’ Does an influential mean a person who moves markets, impacts consumers, inspires winemakers, forms policy,...
END_OF_DOCUMENT_TOKEN_TO_BE_REPLACED

Our 2013 iteration of this list is intended as a source of education and discussion. The making of this list is never an easy process. Who are the most influential wine people in the United States, and how exactly do you define ‘influential?’ Does influential mean people who move markets, impact consumers, inspire winemakers, form policy, and create debate? Yes. Though some decry the consolidation of the wine industry (and that is an issue worth considering) we are not trying to suggest who is “good” or “bad” within America’s wine industry. We merely define the Top 100 people, from winemakers to law makers, bankers to bloggers, and sommeliers to celebrities who influence wine; how it is made, marketed, perceived, sold, shipped, purchased, shared and consumed. As was true in 2012, we sought help to assemble this list people from a diverse group of people and we are grateful for their input. And we chose to release it today, January 29th, as it was on this day in 1919 when the pathetic policy of Prohibition was ratified; the effects of this lunatic legislation still evident in our country’s inability to ship and sell wine across state lines. We honor winemakers, wine drinkers and wine lovers of every conceivable demographic. Use this list, comment on it, share it with everyone, learn from it, and continue your joy of being IntoWine.
END_OF_DOCUMENT_TOKEN_TO_BE_REPLACED

Ah the ubiquitous list. Everywhere you turn these days there is a top 10, the best 50, or some iteration of a who’s who list. So we can’t resist, besides, our Top 100 Most Influential Wine Industry list scored a lot of buzz, created a lot of chatter and even made a few enemies. This list is all about winemakers, those currently making wine here in America – not the great ones who have come before, but folks who make wines you can find now. There are some 7,000 bonded wineries in the U.S., and there’s a lot of forgettable wine being made. And in a world of homogenization of wine styles and a sense that our domestic wine industry is not legitimate without a French or Italian flare, we desire to promote regional flavor profiles of all American wine craftspeople. There are names here you’ll know and recognize, and names you never heard of but everyone on this list is influencing the public, fellow winemakers and the media in large and small ways. Use this list to learn about wines, varieties and regions you may not have considered; comment on it, share it with everyone, but above all continue your joy of being IntoWine.
END_OF_DOCUMENT_TOKEN_TO_BE_REPLACED

BEST OFF-THE-BEATEN-PATH NAPA TASTING ROOMS After having visited numerous renowned wineries, many of us are looking for the hidden gems within the Napa Valley. Good wines are certainly valued, but the entire experience a winery provides leaves guests wanting to return and telling their friends and family to visit. Each winery listed in this article has some special draw, whether it’s art, architecture, ambiance, gardens or compelling history.
END_OF_DOCUMENT_TOKEN_TO_BE_REPLACED