The World of Wine - Boxed Set: The World Atlas of Wine and The Story of Wine

This luxury box-set includes two of the world's most successful and bestselling wine books by the two foremost wine writers on the subject. A truly incomparable set of books, and a unique and essential addition to every wine-lover's, historians or literary followers library. 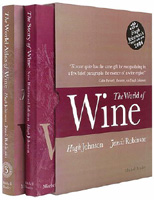 The World Atlas of Wine commands the position as the indispensable wine book for novice and expert alike thanks to its exceptional maps, the quality of its prose, and its well-timed revisions. Hugh Johnson and Jancis Robinson have teamed up to combine their unrivalled talents to produce this fifth edition, with an impressive collection of 178 new and fully updated detailed maps.

Fifteen years ago Hugh Johnson wrote what is critically considered to be his "masterpiece" and a timeless classic of wine literature. The Story of Wine has been heralded as one of the most comprehensive and certainly one of the most enjoyable books on wine in any language. This second edition has been condensed, updated, and re-illustrated with a selection of new evocative photographs to bring the book up-to-date with the latest developments in the world of wine.

About the Authors
Hugh Johnson is widely regarded as the world's foremost wine writer and one of the greatest authorities in his field. His approach to wine has earned him the admiration of wine-lovers all over the world. Hugh's remarkable series of wine books began in 1966 with the best-selling Wine. His subsequent award-winning titles include Story of Wine and Wine Companion (now in its fifth edition). The first edition of The World Atlas of Wine was published in 1971. Sales of Hugh's books, including the annual Pocket Wine Book and his gardening titles, The Principles of Gardening and The International Book of Trees, now exceed fourteen million copies.

Jancis Robinson is internationally renowned for her witty, authoritative wine writing. Her award-winning books include Vines, Grapes and Wines and the Oxford Companion to Wine. Critically acclaimed as "our cleverest, most thoughtful wine writer" (The Observer) and a "writer of breathtaking clarity" (Wine Spectator), Jancis now lectures, writes, and appears regularly on television. She is wine correspondent for the Financial Times and writes an international column. Millions know her as a television presenter of the award-winning series Jancis Robinson's Wine Course and Vintner's Tales.

The World Atlas of Wine

More than two decades have passed since The World Atlas of Wine made its first appearance. During that time the book that the French supreme wine authority, the Institute National des Appellations d'Origine (INAO), called "a major landmark in the literature of wine" has been hailed by critics all over the world as "extraordinary" and "irreplaceable." Translated into a dozen languages, it has been bought by more than two million people, and commands an unrivaled position as the definitive work for wine lovers, connoisseurs, and professionals alike.
END_OF_DOCUMENT_TOKEN_TO_BE_REPLACED

Adam Strum is the Founder and Chairman of Wine Enthusiast Companies and Editor and Publisher of Wine Enthusiast Magazine and heads up the largest group of wine commerce and media companies in the world. With more than 800,000 readers Wine Enthusiast Magazine and its Web site Winemag.com provide editorial content and authoritative reviews and ratings of tens of thousands of wines every year. The Wine Enthusiast Catalog/Web business is the world’s leading inventor and seller of wine accessories and wine storage. Strum, a second-generation, 35-year veteran of the wine business, is a pioneer whose multi-faceted wine-related businesses have had a major impact on increasing wine consumption and wine culture in America. Since 1979 Wine Enthusiast Companies has mailed and distributed more than 300 million wine-related publications in the United States and around the world. Not bad for a husband and wife team who started a mail-order business in their attic.
END_OF_DOCUMENT_TOKEN_TO_BE_REPLACED

Doug Frost is a Kansas City author who writes and lectures about wine, beer and spirits. He passed the rigorous Master Sommelier (MS) examination and two years later became America’s eighth Master of Wine (MW). He is one of only three people in the world to have achieved both these remarkable distinctions, and he’s sincerely a nice guy. Doug is also the author of three books on wine including “ Far From Ordinary: The Spanish Wine Guide.” He is a contributor to the Oxford Companion of Wine, and writes about wine and spirits for many publications including the San Francisco Chronicle, Underground Wine Journal, Drinks International, Practical Winery & Vineyard, Wines & Vines, Wines & Spirits, Cheers Magazine, Santé Magazine, and Epicurious.com, and he is the beverage columnist for the James Beard award-winning food section of the Kansas City Star .
END_OF_DOCUMENT_TOKEN_TO_BE_REPLACED

The Oxford Companion to Wine

Jancis Robinson, A. Dinsmoor Webb, and Richard E. Smart - Editors Description From The Publisher: Hailed by Frank J. Prial in The New York Times as "a required reference for anyone who is serious about wine," and by Anthony Dias Blue as "one of the definitive reference books on the subject," The Oxford Companion to Wine won every major wine book award, including the Julia Child and the James Beard awards. Now, Jancis Robinson has completely revised this masterpiece, adding over 500 new entries and thoroughly updating most of the rest. Lavishly illustrated, with over 200 black and white pictures, 31 full color plates, and 31 maps of every wine region in the world, the Companion is the only wine volume to combine science, history, geography, wine varieties, social and cultural information, and much more. Ranging from Abruzzi and armagnac to Zimbabwe and Zinfandel, from Dionysian revels in ancient Greece to today's leading wine research centers, its 3,400 alphabetically arranged entries explore all aspects of wine, including the latest advances in viticulture and enology.
END_OF_DOCUMENT_TOKEN_TO_BE_REPLACED

Leslie Sbrocco is an award-winning author, speaker, wine consultant, and the author of two national wine books. As host of the PBS series Check Please! , she has won a coveted James Beard award, two Tasty Awards, and three Emmy awards. Sbrocco was also a featured judge on the PBS national series, The Winemakers , and she is a regular guest on NBC’s Today Show. She is also a wine educator for Crystal Cruises and Holland America Cruise Lines, and has started a new venture, Thirsty Girl, which aims to empower women in their wine and food choices.
END_OF_DOCUMENT_TOKEN_TO_BE_REPLACED