The World Atlas of Wine

More than two decades have passed since The World Atlas of Wine made its first appearance. During that time the book that the French supreme wine authority, the Institute National des Appellations d'Origine (INAO), called "a major landmark in the literature of wine" has been hailed by critics all over the world as "extraordinary" and "irreplaceable." Translated into a dozen languages, it has been bought by more than two million people, and commands an unrivaled position as the definitive work for wine lovers, connoisseurs, and professionals alike.

Buy The World Atlas of Wine

The fourth edition of this undisputed classic has been completely revised and updated to keep abreast of the changing world of wine. Since the publication of the third edition, wine making and wine appreciation have not stood still. The Old World has risen to the challenge of the New: important legislative changes have taken effect; previously unrecognized wines and wine regions are coming to the fore; wine makers are taking their skills into new regions and new countries and are learning from one another. In every wineproducing country standards of wine making are being raised in response to the unrelenting pressure for quality, not quantity. 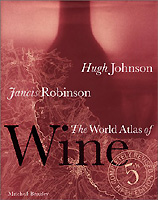 Hugh Johnson emphasizes that there is an intimate relationship between geography and wine -- that where the wine comes from determines its quality, style, and taste. This new edition of the Atlas guides the wine lover and professional through the world's quality vineyards to the year 2000. The authoritative choice of maps has been expanded in its coverage and new information added, maintaining the crucial link between wine and place. The better the wine, the more precisely the Atlas locates its origin, down to a single field.

Besides revealing where a vineyard is located, maps can explain why it is there: what is singular about the site and its size; its soil, slope, sunshine, rainfall; and how it relates to its neighboring vineyards. They reveal the fundamental differences in terroir -- the myriad details of a landscape which conspire to make the difference between a grand cru and a vin de table.

This new edition of the Atlas further expands its coverage and visual appeal. Every one of its 180 maps has been revised, extended where necessary, and brought completely up-to-date. Of these, 36 are totally new, mapping areas that have recently risen -- or risen again -- to excellence, or have changed so greatly that they demand new cartographic treatment. The entire introductory section on the background to wine and its enjoyment has been redesigned and newly illustrated. New artwork, color photographs, fact boxes, and tables enhance the text, much of it rewritten to reflect the latest changes.

Despite the considerable efforts of competitors around the world, no other wine atlas can match The World Atlas of Wine or claim its cartographic excellence. The translation of this atlas into a dozen languages bears witness to its remarkable success. In his foreword to the third edition, the president of the Office International de la Vigne et le Vin predicted a choice place for the Atlas in every wine expert's or wine lover's library. This fourth edition is set to maintain and enhance its status through a third decade.

About the Authors
Hugh Johnson began acquiring his wine knowledge as a member of the Wine and Food Society at Cambridge. When he came down from King's College in 1961 he became feature writer for Vogue and House & Garden, writing, among other things, wine columns for both magazines. In 1963 he became general secretary of the Wine and Food Society and succeeded the legendary gastronome Andre Simon as editor of Wine and Food. At the same time he became wine correspondent of The Sunday Times and started work on his first book Wine (1966), through which he established himself at the age of 27 as one of the subject's foremost writers. His rare talent for making the most complex subjects readable has led to a remarkable sequence of books. Hugh Johnson has been President of the Sunday Times Wine Club since its foundation in 1973. He is also retained as a consultant to a string of diverse organisations including British Airways and Jardines Wines and Spirits in Tokyo. Hugh has also lectured and featured on television and radio many times around the world. He has developed a range of high-quality wine accessories including glasses, decanters, coolers and corkscrews which form the Hugh Johnson collection, and sells in, among other countries, the US, Japan, Hong Kong, and Italy.

Jancis Robinson is a wine writer and broadcaster with an international reputation. The first journalist to have passed the notoriously stiff Master of Wine exams, she was awarded an Honorary Doctorate by The Open University in 1997and was Decanter Magazine's 1999 (Wo)man of the Year. She was also voted first ever Television Personality of the Year in the 1999 Glenfiddich Awards for food and drink media. In the same year her fellow wine writers voted her Most Influential Wine Writer by an overwhelming margin. In 1996 she was named Wine Woman of the Year in the US and in 2001 will be awarded the Florida Winefest's second ever Andr' Simon award for wine writing, won by Robert Parker last year.

Hugh and Jancis remember first meeting at a tasting of Ontario wines in Canada House, London in 1976. Hugh and Jancis would be at the same wine tastings all over the world from then on. This then led to Hugh inviting Jancis for lunch at the Spanish Restaurant in Swallow Street London. Soon after they became firm friends and their paths have crossed on many occasions from tastings to book launches, and from press conferences to trips abroad.

Doug Frost is a Kansas City author who writes and lectures about wine, beer and spirits. He passed the rigorous Master Sommelier (MS) examination and two years later became America’s eighth Master of Wine (MW). He is one of only three people in the world to have achieved both these remarkable distinctions, and he’s sincerely a nice guy. Doug is also the author of three books on wine including “ Far From Ordinary: The Spanish Wine Guide.” He is a contributor to the Oxford Companion of Wine, and writes about wine and spirits for many publications including the San Francisco Chronicle, Underground Wine Journal, Drinks International, Practical Winery & Vineyard, Wines & Vines, Wines & Spirits, Cheers Magazine, Santé Magazine, and Epicurious.com, and he is the beverage columnist for the James Beard award-winning food section of the Kansas City Star .
END_OF_DOCUMENT_TOKEN_TO_BE_REPLACED

Adam Strum is the Founder and Chairman of Wine Enthusiast Companies and Editor and Publisher of Wine Enthusiast Magazine and heads up the largest group of wine commerce and media companies in the world. With more than 800,000 readers Wine Enthusiast Magazine and its Web site Winemag.com provide editorial content and authoritative reviews and ratings of tens of thousands of wines every year. The Wine Enthusiast Catalog/Web business is the world’s leading inventor and seller of wine accessories and wine storage. Strum, a second-generation, 35-year veteran of the wine business, is a pioneer whose multi-faceted wine-related businesses have had a major impact on increasing wine consumption and wine culture in America. Since 1979 Wine Enthusiast Companies has mailed and distributed more than 300 million wine-related publications in the United States and around the world. Not bad for a husband and wife team who started a mail-order business in their attic.
END_OF_DOCUMENT_TOKEN_TO_BE_REPLACED

The World of Wine - Boxed Set: The World Atlas of Wine and The Story of Wine

Andrea Robinson one of the country’s leading wine educators, and is one of only 16 women in the world who have been appointed Master Sommelier by the prestigious Court of Master Sommeliers. She was the first woman ever chosen Best Sommelier in the United States by the Sommelier Society of America. In 2007 she was appointed Master Sommelier for Delta Air Lines, for whom she selects all of their in-flight wines as well as develops flight attendant wine training. Her production company JGR Productions produces informative food, wine and travel video content for Delta Air Lines, Borders Books, and broadcast media and she has worked with the Food Channel and PBS. She is the author of eight wine and food books including Andrea Robinson’s Wine Buying Guide for Everyone , and her articles have appeared in publications such as Health , Eating Well , Esquire , Real Simple , Money , and Bon Appétit . She has received a James Beard Award for Broadcast Journalism. Formerly this busy mother of three was the Wine Director at Windows on the World, and was Corporate Director of Beverage Programs for Starwood Hotels.
END_OF_DOCUMENT_TOKEN_TO_BE_REPLACED

Leslie Sbrocco is an award-winning author, speaker, wine consultant, and the author of two national wine books. As host of the PBS series Check Please! , she has won a coveted James Beard award, two Tasty Awards, and three Emmy awards. Sbrocco was also a featured judge on the PBS national series, The Winemakers , and she is a regular guest on NBC’s Today Show. She is also a wine educator for Crystal Cruises and Holland America Cruise Lines, and has started a new venture, Thirsty Girl, which aims to empower women in their wine and food choices.
END_OF_DOCUMENT_TOKEN_TO_BE_REPLACED