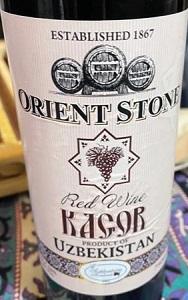 Kagor is a fortified dessert wine made from cabernet sauvignon, saperavi and other grapes.  Usually fouund on-near the Black Sea coast of the former Russian Empire, primarily in Moldova and Crimea, though this one comes from Uzbekistan.  The name is a Russian version of Cahors from Southwest France.  Peter the Great was a fan of Cahors wines and started importing them in bulk. The Russian clergy, swayed by the deep color (Christ's blood), adopted Cahors for sacraments in 1733. The modern version of Kagor was developed for Prince Lev Golitsyn , a winemaker in the 1890's in Russia.  Deep garnet in color.  The nose has tootsie-rolls, caramel, some black currants and slight alcohol.  On the palate, this is full bodied.  16% ABV.  Sweet but not cloying.  Easy drinking with chocolate, light cassis and slight caramel notes.  Warm but not hot on the finish.  Somewhat reminiscent of a 10 year Tawny Port.  Very interesting and certainly fairly priced.  Drink on its own for dessert or maybe with a chocolate dessert or maybe with Crème caramel.