Sonoma County winemakers are searching out the perfect marriage of locale and climate to produce noble cool-climate syrah.

“This is, honestly, one of the best places in the world to grow syrah,” said winemaker John Holdredge, who makes a cool-climate syrah from a Russian River Valley vineyard called Lovers Lane. “You can have a nice syrah from a warm climate but it’s just a different animal. I don’t think I’ve had one where I thought, wow, that’s pretty.”

Holdredge is among a growing list of winemakers devoted to cool-climate syrah, sourcing from vineyards in such cooler appellations as Russian River, Sonoma Coast, Carneros and Bennett Valley.

Cool-climate syrah tends more toward the iron fist in the velvet glove analogy, a style being actively sought out by a cadre of wine drinkers.

“There is no definition of cool-climate,” Holdredge said. “To me, if you can successfully grow cabernet, it’s not a cool climate, but we’re all just trying to find our way through this grape.”

Holdredge, DuMOL, Sebastopol Vineyards, Radio-Coteau and (coming soon) Kosta Browne are names to look for in Russian River syrah; Peay, Renard (which buys fruit from Peay) and Failla are benchmarks of the Sonoma Coast; the Hudson and Hyde vineyards grow much of the coveted syrah in Carneros; while in Bennett Valley, small producers such as Eric Kent and Broc Cellars are sourcing grapes from growers like Dry Stack Vineyard.

“Is it a site? A soil? All those factors come into play,” Holdredge said. “But at the end of the day cool-climate syrah expresses differently.”

That expression is marked by notes of smoked meat tempered by violets, with a touch of earthiness thrown in.

“It’s tucked in a bowl-shaped, southeast-facing valley,” he explained. “It doesn’t get sunlight until an hour or so after the rest of Chalk Hill and it loses it an hour or so earlier, and it’s always windy.”

The result? A cool-climate syrah.

“The extra hang-time results in grapes that ripen slowly and fully with flavors, sugars and acids maturing in unison,” he said. “It’s nice, because we’re getting the cool-climate plusses without the cool-climate minuses.”

Minuses can include mildew and botrytis pressures as grapes hang longer into October and November. But when it works, it works.

“This wine evolves and changes as it breathes,” Gaffner said. “First, I get dark fruit with floral and lavender tones, then after a time the wine goes to mocha dust, dark chocolate and roasted coffee beans.”

Gaffner is another one who has long adored the wines of the Rhone, especially syrah.

Which sense of place in the North Bay best suits syrah remains in the early stages of experimentation, with syrah planted in a variety of climates across a variety of appellations.

“We’re all still trying to figure out where syrah should be grown,” Gaffner said. “It’s still up in the air, but we’re getting closer every day.”

When veteran winemaker Steve MacRostie went looking for a new vineyard to plant his chardonnay, pinot noir and syrah he discovered Wildcat Mountain in the Carneros/Sonoma region. "I felt Wildcat would push the envelope, something untried. The cooler climates, the stressful site, the thinner soils; this is not a safe place to set up a farming operation. In a business sense it was probably rather stupid," he said plainly.
END_OF_DOCUMENT_TOKEN_TO_BE_REPLACED

For the 2015 Best of Sonoma Lists we surveyed hundreds of local vintners asking for their inside perspective of the best wines, tasting rooms, and restaurants in Sonoma. There are certain syrahs—and the wineries who make them—that should be on every syrah-inspired Sonoma wine tour. To get a list of the top of the top, we surveyed over 100 Sonoma wine producers for their favorite syrahs in Sonoma.
END_OF_DOCUMENT_TOKEN_TO_BE_REPLACED

What an outstanding value.  Under $30 for this quality of a Syrah.  It will certainly improve with some cellar time but is great right now.  Purple in color.  The nose has boysenberries, plums, black pepper, slight roasted herbs and hints of grilled meat.  On the palate, this is lush.  Ripe but not over.  Plenty of boysenberry fruit with underlying char.  Nice finish.  Easy drinking but more, this is delicious.  Great job! 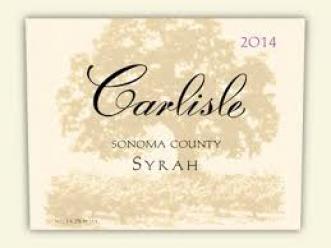 Great showing for this.  Still quite youthful.  Purple in color, to the rim.  On the nose, this has black raspberries, slight black pepper, hints of roasted meats and slight charcoal.  Grat rich texture.  Pure black raspberry fruit with great intensity.  Layers of fruit with earth.  Long finish.  Just a fantastic wine with at least a decade or two left.