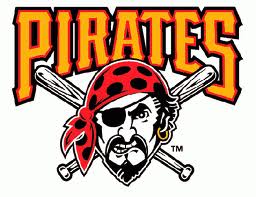 What's an appropriate wine to serve at a Pittsburgh Pirates themed party? What wine would be a good gift for a hard core Pirates fan?

If you've ever met a Pittsburgh sports fan, you know that the city's identity is so closely aligned with its professional sports teams that an outsider could be forgiven for thinking that Pittsburgh wouldn't exist without them.  In fact, one of Pittsburgh's nicknames, "City of Champions," comes straight from its long history of winning teams.

Although the Pittsburgh Pirates have not had a winning season since 1992, as of this writing, the team boasts an impressive record, including nine National League championships and five World Series titles.  Throughout its long history – the team joined the National League in 1887 – the Pirates have nurtured talented players, started baseball traditions and, above all, created a fan base that has remained loyal for over 100 years.

Unfortunately, the Pirates have also set a record for the most consecutive losing seasons (18) by a professional sports team.  Nevertheless, Bucs fans turn out to enjoy the fun and fireworks at PNC Park, the team's home since 2001, and PNC Park sells out whenever the Pirates' fortunes seem to be improving.  Pittsburgh's devotion to its current team and to the legacies of past players and managers (Chuck Tanner, Bill Mazeroski, Honus Wagner and Danny Murtaugh leap to mind) make Steel City something much more than just another town with a pro baseball team.  Even the team's mascot, the Pirate Parrot, is unique.  (Tip: If you dislike Silly String, stay out of the Parrot's path.)

While Pittsburgh is better known for its beer than its wines, there are plenty of options available if you are pouring wine for a Pirates fan.

While you won't find any wineries in downtown Pittsburgh, the Pittsburgh Countryside Wine Region   boasts 17 wineries, some of which also own their own vineyards.  Seven of these wineries are featured along the Southwest Passage Wine Trail.  For example, you could visit La Casa Narcisi Winery, a family-owned winery that produces wines from grapes grown in its own vineyard and in other Pennsylvania vineyards.  Stop by and enjoy a wine tasting experience or a meal at the on-site La Vite Ristorante.

Michael Stephen Kavic Winery, located just outside of Pittsburgh in Carnegie, bills itself as a "Pittsburgh proud" urban winery.  Michael Kavic and his wife, Patricia, grew up making wine with their respective families and returned to winemaking after many successful years in the medical and social work professions.  Today, Kavic uses only locally-grown grapes in his hand-crafted wines.

Glades Pike Winery, in the Laurel Highlands, produces award-winning dry, semi-dry, sweet, fruit and dessert wines.  One weekend each month in the summer and fall, Glades Pike Winery offers "Music in the Mountains," two afternoons of music at the winery.  Bring a picnic, buy a bottle of wine, spread your blanket and join in the fun.

3 Finger Wine Company, a collaboration of three winery owners in Healdsburg, California, offers negociant wines under its Treasure Hunter Wines label.  Treasure Hunter wines are made from surplus wines purchased from other reputable producers, which are then labeled (with pirate-related names) bottled and sold by Treasure Hunter Wines.  Many releases sell out extremely quickly, so you'll want to watch carefully for Treasure Hunter's release announcements.  Expect to pay $25 for a bottle of 2008 Petite Sirah "The Admiral of the Black" and $21 for a bottle of 2008 Proprietary Red Blend "Jenny's Tea Cup" Sonoma County.

What's an appropriate wine to serve at a Pittsburgh Steelers themed party? What wine would be a good gift for a hard core Steelers fan? Steeler Nation Wherever you go in the U. S., you will find fans of the Pittsburgh Steelers. In fact, the team is so popular that its fans are called the "Steeler Nation." You can join Steelers fan clubs in nearly every major U. S. city, including Atlanta, Kansas City and Tampa. Part of the reason for all of this enthusiasm is the team's long history; founded in 1933 as the Pittsburgh Pirates, the Steelers are the fifth-oldest National Football League team. The main reason, however, for the Steelers' popularity with fans is the team's outstanding record. No other team has won as many Super Bowls – six – as the Pittsburgh Steelers. The Steelers' all-time roster includes some of the greatest names in professional football history: Ernie Stautner, Terry Bradshaw, Joe Greene, Lynn Swann, Franco Harris, John Stallworth, Jack Lambert, and, of course, current quarterback "Big Ben" Ben Roethlisberger.
END_OF_DOCUMENT_TOKEN_TO_BE_REPLACED

Pennsylvania doesn’t spring to mind when you think of wine, and yet there are 140 wineries in the state. Equally important is that William Penn, for whom the state was named, planted the very first vinifera vines in America in 1683, and that the very first commercial vineyard in the U.S. was planted by the Pennsylvania Wine Company in 1793. Therefore, it all begins to add up.
END_OF_DOCUMENT_TOKEN_TO_BE_REPLACED