A Life Uncorked by Hugh Johnson

Hugh Johnson, the preeminent wine writer of our time, now brings to his fans around the world his first major new book in a decade: this stylish, intimate, and delightfully opinionated autobiographical tour through the world of wine. A Life Uncorked weaves Johnson's wide-ranging ruminations, memories, and observations on his remarkable life together with information on every aspect of wine--from its technical production to its cultural significance. In luminous, utterly engaging prose, he taps into his enormous experience to consider topics such as tasting, cellaring, choosing, understanding, comparing, and buying wine, as well as wine's more ephemeral and personal pleasures, lures, and mysteries. 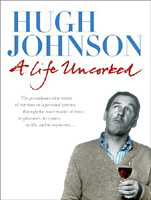 At the heart of A Life Uncorked is the idea that wine is more than a drink; its characteristics link it directly to memory, to locations around the world where grapes are grown and wine is made, and to the dining rooms, restaurants, bars, and gardens where we consume it. Johnson takes us to all of these places and many more in this delightful and revelatory memoir. Peppered with anecdotes throughout, A Life Uncorked simultaneously educates and entertains with its absorbing perspective on the complex and fascinating world of wine from one of its most well-known and well-liked aficionados.

About the Author
Hugh Johnson, widely regarded as the world's foremost wine writer, is known to millions through his internationally best-selling wine books, including his annual Pocket Wine Book, The World Atlas of Wine, Wine, The Story of Wine, and How to Enjoy Your Wine. A highly respected editor and broadcaster, Johnson has been president of the Sunday Times Wine Club since 1973 and of the Circle of Wine Writers since 1997. He has appeared in several television series. Johnson was the first wine editor of Vogue and is an editorial advisor to The World of Fine Wine. Johnson, who is also passionate about gardening and trees, is author of The International Book of Trees and Principles of Gardening: The Practice of the Gardener's Art. For thirty years, he has written the monthly Tradescant's Diary column for The Garden magazine.

The Emperor of Wine: The Rise of Robert M. Parker, Jr. and the Reign of American Taste by Elin McCoy

The first book to chronicle the rise of Robert M. Parker, Jr., the world's most influential and controversial wine critic, who, over the last twenty-five years, has dominated the international wine world and embodied the triumph of American taste.
END_OF_DOCUMENT_TOKEN_TO_BE_REPLACED

When talk turns to Napa Valley royalty, Robert Mondavi and the Mondavi family indisputably qualify as the ruling monarchy of the Napa Valley –and frankly the US- wine industry. With an almost biblical or Shakespearean flair, the Mondavi family story of the last 100 years is one of passion, pettiness, family squabbling, wild success, dramatic failure, and of course, wine. In her new book, The House of Mondavi: The Rise and Fall of an American Wine Dynasty , author Julia Flynn delivers a masterful narrative on the Mondavi clan. IntoWine.com recently had the privilege of chatting with Julia about the book and the evolution of the Mondavi family story.
END_OF_DOCUMENT_TOKEN_TO_BE_REPLACED

Jancis Robinson's Wine Guide: A Guide to the World of Wine

The enormous variety of wines available today can be baffling even to an experienced buyer. Anyone who enters a wine store is immediately confronted by rows and rows of racks filled with a myriad of choices. Where do you begin when all you want is a reasonably priced quality wine to serve with dinner? Jancis Robinson can make anyone an expert, or at least an informed buyer, in short order.
END_OF_DOCUMENT_TOKEN_TO_BE_REPLACED

Harvests of Joy: My Passion for Excellence; How the Good Life Became Great Business by Robert Mondavi

In 1965, after a notorious family feud, Robert Mondavi-then fifty-two years old-was thrown out of his family's winery. Far from defeated, Mondavi was dedicated to a vision of creating a superior wine. What has happened since that fateful day is one of the greatest success stories of American...
END_OF_DOCUMENT_TOKEN_TO_BE_REPLACED