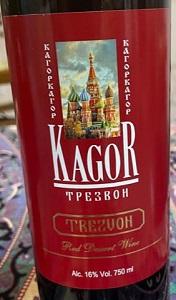 Kagor is a fortified dessert wine made from Cabernet Sauvignon and other grapes.  It  originated as a sacramental wine for use in the Russian Orthodox Church.  Peter the Great had developed a taste for Cahors wines and started importing them in bulk. The Russian clergy was so impressed with its blood-red color (reminiscent of Christ's blood) that the Holy Synod adopted Cahors as a preferred wine for sacraments in 1733. Kagor is a modern type of "Cahors" developed for Prince Lev Golitsyn in the late 19th century. Its production usually involves heating the seeds and skins to 65 °C or higher.  This one is a deep ruby in color, clear and bright.  The nose has dried fruits, some cherry cough medicine, a hint of brown sugar.  Thick and viscous, full bodied, this has some dried fruit, maybe a touch of cherries.  It is sweet and smooth.  A little goes a long way, but overall, this is pleasurable.  It would work with a small touch of chocolate and just fine on its own. With all this alcohol and sugar, it seems like it should last for a long time.