In this episode of IntoWineTV, host Lisa Kolenda and wine experts Bartholomew Broadbent and Pamela Busch convene at San Francisco's CAV Wine Bar and Kitchen for a blind tasting and discussion of 24 different wines made by women.

Theme: Wines by Women. In this tasting IntoWine is featuring wines from producers where either the winemaker or the owner/founder is a woman.

Spotlight on: Heidi Peterson Barrett, Winemaker
Heidi Peterson Barrett grew up in the Napa Valley in a winemaking family. After graduating from UC Davis in 1980 with a B.S. Degree in Fermentation Science, she went to work for Justin Meyer at Franciscan Vineyards and Silver Oak. After subsequent crush jobs at both Lindeman's Wines in Australia and Rutherford Hill, in 1981 Heidi became assistant winemaker to Jerry Luper at Bouchaine Vineyards.

Then in 1983, at age 25 became winemaker at Buehler Vineyards. It was here that she first attracted critical acclaim by greatly improving the wine quality and taking the production from 6,000 cases to 20,000 cases. This wide range of experience has given Heidi a unique insight into winemaking. " I think it is important to have a wide variety of experience to draw from. You can't just step in and be the winemaker unless you have a lot of experience in the cellar. I wanted to make sure that when I finally had the title of winemaker, I had earned it."

In 1988, she left Buehler to become an independent winemaker (freelance), making wine for a number of small wineries. Within a week she was hired by Gustav Dalle Valle and was winemaker at Dalle Valle Vineyards until spring 1996. It was there that she took her abilities to the next level, putting Dalle Valle on the map and creating some powerful yet elegant Cabernets, including the famous "Maya" wine, a proprietary Cabernet blend that received two perfect 100 point scores from Robert Parker ( the '92 and '93) as well as record breaking bids at the Napa Valley Wine Auction. She started making wine for Screaming Eagle in 1992, which has also received two perfect 100 pt scores (the '92 and recent '97). A 6-liter bottle of '92 SE set a world record for the highest price ever paid for a single bottle of wine at the 2000 Napa Valley Wine Auction selling for $500,000. A vertical offering went for $650,000 at the 2001 NVWA.

Since 1988 she has developed a stellar client list of super and ultra-premium wineries. She is currently winemaker for La Sirena, Amuse Bouche, Revana Family, Jones Family Vineyards, Barbour Vineyards, Paradigm Winery, and Lamborn Family. She is consulting winemaker for Kenzo Estate, Terrano, and Meyer Family. Other past clients include Screaming Eagle, Showket Vineyards, Grace Family, Vineyard 29, and Hartwell/Grace Vineyards. "I like the challenge of working with so many different wines. My philosophy is to make the best wines possible with emphasis on the unique characteristics of each individual vineyard. I try to maximize the potential of each vintage in a very balanced, elegant style of winemaking."

Heidi, who loves the ocean and especially scuba diving, also started making her own wine, La Sirena in 1994. "I was looking for a name for my wine which would be as magical as I think wine is. La Sirena which means "the Mermaid" in Italian and Spanish is a way of representing two of my great passions". La Sirena focuses on three varieties, Cabernet Sauvignon, Syrah, and Muscat Canelli.

She has been a wine judge at various competitions over the last 20 years, was president of Napa Valley Wine Tech, and has graced the covers of both The Wine News and The Wine Enthusiast. She has been a featured guest on several television programs and radio shows, was winemaker of the year, made Parker's list of wine personalities of the year for the years 1994 and 1995 and is on Parker's wine heroines list of 1998 (one of two from the US). Parker has dubbed her the "first lady of wine". TIME Magazine named her "The Wine Diva of Napa ".

Heidi Peterson Barrett As arguably the most celebrated, respected, envied, and in-demand winemaker in America today, Heidi Peterson Barrett is one of only a handful of winemakers who can legitimately lay claim to "superstar" status. Her wines at both Dalle Valle and Screaming Eagle resulted in multiple 100 point scores from Robert Parker (Parker himself dubbed her the "First Lady of Wine") and helped redefine both the meaning and value of "cult" wines. She rocked the wine world at the 2000 Napa Valley Wine Auction as a 6-liter bottle of her 1992 Screaming Eagle sold for $500,000, in the process setting a world record for the highest price ever paid for a single bottle of wine (a vertical offering went for $650,000 at the 2001 Napa Valley Wine Auction). Heidi Peterson Barrett is currently winemaker for Amuse Bouche, Paradigm, Revana, Barbour, Lamborn, Fantesca, as well as her own label La Sirena . I recently had the pleasure of catching up with Heidi to talk about winemaking, her own La Sirena label, and the legacy of Screaming Eagle.
END_OF_DOCUMENT_TOKEN_TO_BE_REPLACED

Purple in color.  The nose is deep with black raspberries, roasted meats and black pepper.  On the palate, black raspberries and a nice underlying earthy/char.  Starting to show some layers but still young.  Moderate tannins.  Long finish.  This is really starting to hit its stride right now.  There is still some upside potential to get better in a few years. 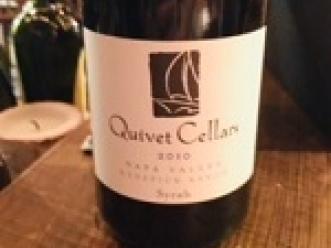